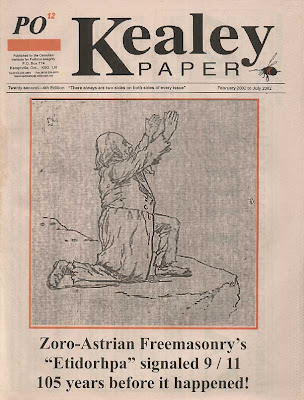 The number 11 has been a code number of ancient Zoroastrian since the beginning of time. It is now claimed by them to be the second way they have of writing number 2. However, secretly they know that it really was the first, as two bars placed side by side was the original way of designating the 2.

The primary thesis of Freemasonry is that one never gets it right the first time around. Therefore the ancient priests of Zoroastrian Freemasonry have built their entire coding structure on the principle that number #2 is in fact number #1.

The appointed vice president has secret power/control over the elected president. A second is the first unit of time on the clock. The CFO (the Chief Financial Officer) has more power in the financial markets than has the CEO (the Chief Executive Officer). A deputy minister has more real power than a minister, when it comes to who runs a p a r l i a m e n t a r y government.

Freemasonry uses the concept of two cues, or clues, to signify their interest in the topic at hand. Their main cues are Alpha-numeric. They are often the letters q and u. These letters are "pictographs" which are easily converted, visually, to the numbers 9 and 11.

The line drawing that appears on our cover page was taken from a Freemasonic book that was published in 1896. It is just one of the publications that alludes to the use of the letters q and u, or the numbers 9 and 11 as was printed on the cover "Etidorhpa" in order to attract the attention of Masons to this so called book of fiction.

Similar uses of q and u are made by including them in the names of places; such as with the name of Quebec, the French speaking city and province of Canada and the Qu'Appelle River; a river, about 434km (270 mi) long, of Saskatchewan and Manitoba, flowing east to the Assiniboine River.

Within Freemasonry, the #11 seems to have replaced the #2 in sigificance with the first publication of Attar's masterpiece Conference of the Birds, an allegorical survey of Sufism. Attar a Persian poet and mystic died c.1229. The book uses allegory to relate the fact that world power is being transferred "temporarily" to the Kings of the West from the Dog Priests of the East. Attar's writing seems to have brought about a change, from 10 to 11, in the number of IAMBS including in his works.

The most common meter in English verse. It consists of a line ten syllables long that is accented on every second beat. These lines in iambic pentameter are from The Merchant of Venice, by William Shakespare:n s0oth,/kn0w/nt wh/ am /s sad. / t wea/ris me;/yu say/t wea/ris you....

Similar changes in the number of IAMBS, from 10 to 11, appear in the other works of W I L L - I - A M Shakespeare. Etidorhpa, which is the goddes of love Aphrodite spelled b a c k w a r d s, chronicles the wierd activities of Freemasonry's main w h i s t l e - b l o w e r Captain William Morgan, in 1826.

Likewise for E.A. Poe. Edgar Allan Poe, 1809-1849. American writer known especially for his macabre poems, such as "The Raven" (copied from the ancient Persian version in 1845), and many short stories, including "The Fall of the House of Usher" (1839).

The Poe's The Raven, the words "Never, nevermore Lenore" are repeated 11 times by the visiting raven.

Again, John Bunyan 1628-1688, am English preacher and writer celebrated for his Pilgrim's Progress (two parts, 1678 and 1684). the allegorical tale of Christian's journey from the City of Destruction to Zion, the so called Celedtial City, makes use of the phrase I--AM--THE--MAN.

Wach of these allegories attempt to provide guidance to ancient Z o r o - A s t r i a n Freemasons of Persia, India and Egypt on their quest for the Philosopher's Stone and everlasting life.

The code of q/9 - u/11 is often used in conjunction with its sister code PT. This code of PT (1X1) is associated with the so called "vision" of Constantine which is most often used as embroidery on the back of formal robes worn Catholics priest during official church ceremonies. Macedonian Kings, the PTolemies ran EgyPT between 323-30 BC.

What do all these writings have in common? It is the use of the #11 code that links them all in the same as 11/11, remebrance day on November 11, is linked to two world wars. And, as well is it just coincidence that in order to warn of an emergency, telephone companies ask us to dial 911?

And again, by some strange coincidence if not conspiracy, we have lived through the most dramatic of all terrorist acts to ever strike America, on SePTember 11. If there is a link it is to Z o r o - A s t r i a n Fremasonry.