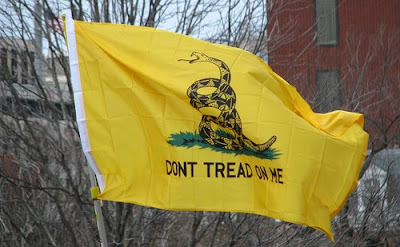 
You may think I am able to say that patriotism is a sham and that countries are nothing more than areas of land separated by imaginary lines drawn on a map, without being accused of supporting world government. Well, not according to some who have swallowed the "take back the Republic" BS hook, line and sinker. So let me say it again: Patriotism is a joke and what you believe is "your" country is nothing more than a piece of real estate which isn't nor has ever been yours at all. Patriotism is another artificially-created religion aimed at people's emotions and has historically served no purpose other than to get people to willingly go off and fight in some bogus war fabricated by an international banking syndicate when the time was right.

Now a new and improved form of patriotism I call paytriotism is being used to get people into a reactionary and confrontational state of mind that will be eventually exploited by the controllers to create an order out of chaos scenario. Do you not find it odd that "mainstream," particularly "conservative" (i.e. Republican) media talking heads like Glenn Beck are now saying many of the same things commonly heard in the "alternative" media and on "paytriot" (pay-to-riot) radio for the past eight years? Do you think this is by some mere coincidence? I think not.

I believe that what some people have been saying is correct, that there will be a revolution in America. Except it won't be a revolution of or by the people as there has never been such a thing, even in this country's past. It will be a revolution of and by the NGOs and think tanks (CFR, CNP, Bilderberg, RAND, etc.), the foundations (Ford, Rockefeller, Carnegie, etc.), and its lapdog media, on behalf of the international banking elite and their Ecclesiastic Freemason handlers hiding behind the facade of organized religion.

As people continue to go on about "revolution" and how it is a good thing, perhaps they should first understand the true meaning of the word REVOLUTION. A revolution is the great solar myth referring to the sun rising to a "NEW DAWN," ushering in a NEW AGE. Perhaps this explains why there hasn't been a revolution in modern recorded history that hasn't had Masonic fingerprints all over it. My feeling is that the next revolution will be no different.

The elite do not fear paytriots with guns, but perhaps they do fear too many people owning guns -- hence an increased push for further gun control and the deliberate depletion of ammunition around the country. However, when the time comes they will depend on just the right number of useful idiots to react in a way that creates the pretext for them to bring out their experimental crowd control toys and come down hard on us all. In an age of directed-energy weapons, guns are virtually obsolete.

It's quite clear that civil unrest is slowly being fomented in this country for a purpose unbeknownst to most. Most people's frustration is indeed genuine and justified, but that doesn't mean there are not devious people looking to exploit that frustration to further their own diabolical agenda.
Posted by Jerd Guillaume-Sam at 2:20 AM