OPEN LETTER TO ALL BUREAUCRATS IN CANADA

OPEN LETTER TO ALL BUREAUCRATS IN CANADA

It has been 9 months since the death of my husband Glen Kealey, brought about by having his hydro shut off in April 2016 followed by interfering with food I was ordering and having delivered to him and the cats, followed by stealing $900.00 a month from the electronically deposited pension/ old age pension from his CIBC account at the Kemptville branch beginning June 2019 and every month after this until he was dead. He was approached by Victim Services Leeds Grenville counties and promised a tent to live in, which they never acted upon. The tent that he received was from a concerned person in Scotland. Our home was ruined by having no hydro and damaged beyond repair by constant flooding into the basement because the sump pump would not work without electricity. He was marinated by all of you by using these tactics before he was murdered in the end .....by all of you. You are all held accountable by CREATION and will be tried for this in the Pineal Court. Charges have already been laid against you.

I could not be with him because of you, not even as he lay dying. I had no say in what happened to his body because of all of you. I found that he was listed as single on his death certificate by a person that was told by me was married to me. This has been listed on his death certificate. I called the registrar to correct this and was sent a form that says I must send notice to the person who provided the the information on the original statement and I do not have this information. I must send a photocopy of Revenue Canada Statement just prior to his death that includes his marital status and death. This would be impossible because Revenue Canada refused all this time to acknowledge our marriage.

Revenue Canada tried to collect the forms that I filled out and hand- carried to the Supreme Court building in Ottawa from Justice Canada for a Leave to appeal which had been recommended that I do by IRB Judge Patrick Lemieux when he heard my case before the IRB in July 2014 and then went on leave due to his wife giving birth. The security guards in the Supreme Court building on the fifth floor told Glen and I when we came to turn in the paperwork that 2 women from Revenue Canada were just there looking for it.

This filing was acknowledged by Crown attorney Max Binnie in a registered letter and Glen called him and asked what the next step was. He told Glen a registered letter would come with the date. The letter never came. We received a letter in December 2014 that the hearing date had been November 6, 2014 and my leave to appeal had been cancelled because I was not there.

Revenue Canada is complicit in my illegal removal from Canada and is complicit in the death of Glen Kealey along with all the other bureaucrats in Canada who colluded together to do this.

The persons in the government of Canada are just as guilty as those who committed these crimes against Glen Kealey and myself because they have done nothing to correct this. 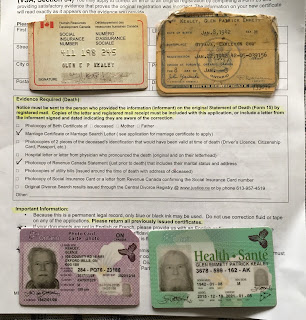 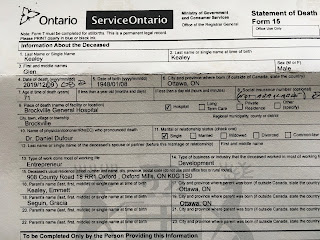 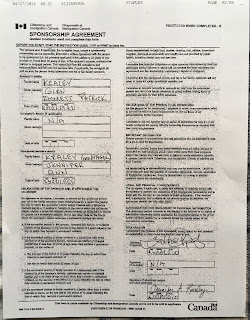 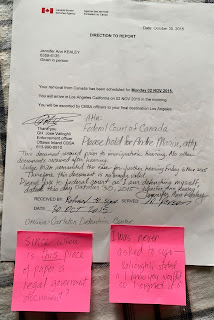 A photo of the receipt to Immigration Canada dated October 1, 2010 is available on the blog site. If I send it through the email to anyone in Canada it is immediately scrambled so it cannot be seen.

Posted by Jerd Guillaume-Sam at 3:10 PM