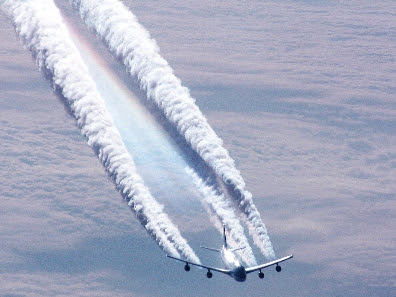 We are presently going through the biggest changes in recorded history. Along with reorganizing the entire structure of society, the elite of the world have begun a process to redefine what it means to be human. We see this is the transhumanist movement, and in the move toward the 'new eugenics' of genetic engineering. Just as sheep are not particularly fond of moving from a pasture that they have become accustomed to grazing in, human beings are not apt to go calmly into seemingly hostile new territory. It is for this reason that the scientific elite have decided to pull out the big guns, that is the up until now top-secret high-tech weaponry, to ease this transition into the coming New Age. Chemtrails appear to be a chief component of this arsenal, and they are being employed to maximum effect.

The entire world is being chemically sprayed from the air on near-daily basis. This is not simply affecting a percentage of the human race, but our entire species (save China, where the slave need be in tip-top shape). This spraying is having a devastating effect on people's health – over the last ten years they have been spraying on a regular basis, and respiratory problems have increased massively among people in western countries. The spray is filled with heavy metals that we are constantly breathing in. I also think it's quite plain that we are being massively drugged with tranquilizers, probably SSRI drugs and varying other psychoactive chemicals. It is obvious when you look at the way people are acting, and even when you analyze your own actions and thoughts. People are tired all the time, and the cognitive processes of the general public appear to come to almost a complete halt.

More than simply being physically tired and abundantly apathetic, people often appear to be spiritually defeated, as if they've lost everything human inside them; they are like shells. No matter what the weight of the present situation may be, human instinct is to become very aggressive when forced into the kind of situation the entire planet is being forced into at this juncture. Everything is changing, we have lost all control of our lives, and no one seems to believe there is future for any of us – the animal in us should be refusing to let us take this lying down. People have never tolerated this kind of abuse as calmly as we are today. It is if people's souls have been crushed. I believe the Chemtrails, though not the sole cause of this mindset, are a large contributor to it. They, along with the vaccines, and the GM and otherwise tainted food and drink, are directly attacking and changing our physiology.

There are certainly other factors directly draining the souls of the masses; but if we are mind, body and spirit, and the biological attacks are debilitating our minds and bodies, they're doing a lot to crush our spirit.

The only ones immune to it are the guys at the top, who have technology they use to keep it from affecting them. The proof that they have such technology is the mere fact that they would not be spraying if they did not have a way to keep it from affecting themselves – the people who run this thing are psychopathic sadists, which does I think make them insane, but they are not stupid, and they do not ever endanger their own survival.

Chemtrails are still not getting nearly enough coverage. A lot of the bigger shows and sites almost act like they think it scares people too much, or perhaps they have some other reason they don't talk about it. I would encourage everyone to talk more about and do more research into this subject. People need to start demanding that politicians and government people address this issue. Eventually, if they know enough are catching on, they will at least have to address the issue. This was made evident when the Television News in Germany recently covered the Chemtrails issue.

Due to the massive drain that these Chemical trails are having on our bodies, I see no other problem more in need of our immediate attention. We all need to call various government officials, ask them about it, and tell them we know. It would also make sense to begin calling in to the various alternative media outlets and forcing them to address this issue. Until we deal with this issue, we cannot deal with any others effectively.

It is also worth mentioning that this is an issue that can be brought up to members of the generally public, as it is happening almost daily now, and when talking to people you can easily show them the sky. People are getting dumber at an astonishing rate, and this is actually much easier to get someone's attention with than trying to explain 9/11.

I hope that you all consider this, and begin to take action. We cannot afford to let this continue to go on unaddressed.

Posted by Jerd Guillaume-Sam at 7:58 PM