Dictionary. A combination of letters without sense, formerly used as a charm against fervers, and arranged as in a margin; hence, unmeaning babble.

Masonic Encyclopedia. A term of incantation which was formerly worn about the neck as an amulet against several diseases, especially the tertian ague. It was to be written on a triangular piece of parchment in the following form: 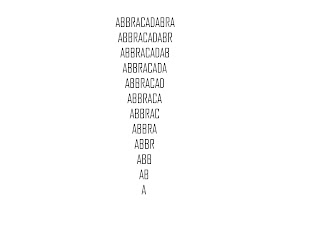 It is said that it first occurs in the Carmen de Morbis et Remediis of Q. Serenus Sammonicus, a favorite of the Emperor Severus in the second and third centuries, and is generally supposed to be derived from the word abraxas. Higgins, (Celt. Druids, p. 246,) who is never in want of an etymology, derives it from the Irish abra, "god," and cad, "holy," and makes abra - cad - abra, therefore, signify abra - the holy - abra.

Hint: Its linked to emanation
Posted by Jerd Guillaume-Sam at 2:35 AM