Amen. The response to every Masonic prayer is, "So mote it be: Amen." The word Amen signifies in Hebrew verily, truly, certainly. "Its proper place," says Gesenius, "is where one person confirms the words of another, and adds his wish for success to the others vows/" It is evident, then, that it is the brethren of the Lodge, and not the Master or Chaplain, who should pronounce the word. It is a response to the prayer. The Talmudists have many superstitious notins in respect to this word. thus, in one treatise, (Uber Musar,) it is said that whosoever pronounces it with with fixed attention and devotion, to him the gates of Paradise will be opened; and, again, whosoever enunciates the word rapidly, his days shall pass rapidly away, and whosoever dwells upon it, pronouncing it distinctly and slowly, his life shall be prolonged.

Moat. A deep trench round the rampart of a castle or other fortified place; a ditch.


Both of these sayings "Amen" and "So Mote it Be" are usually said at the closing of a spell, or ritual, and means "so as I will it, so shall it be done." In other words, it is an affirmation that the object of the speaker's desire will manifest into reality. 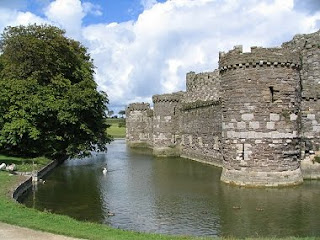 Amen (also spelled Amun, Amon, Ammon, Aman, or Hammon), in ancient Egyptian religion and mythology, is a god whose name means "what is hidden," "what is not seen," or "what cannot be seen."

He is god of the breath of life that animates all living creatures as well as the spirit that permeates every inanimate object. Originally associated with the city of Thebes, Amen later became joined with the sun god Ra (or Re) as Amen-Ra, king of the gods. As such he attained a position of supremacy in the Egyptian pantheon and came to be thought of as one of the creators of the universe. He was the husband of the goddess Mut and father of the god Khonsu; together they were known as the Triad of Thebes. Though unknown and unseen, Amen was thought to characterize great generosity and universal influence.

As the "hidden" god, Amen's true form could not be known, yet he was depicted in ancient Egyptian art in a profusion of forms. Usually Amen is portrayed as a bearded man with a headdress of two tall plumes, colored in alternate sections of red and green or red and blue. Around his neck he wears a broad necklace of intricate design, and he often wears armlets and bracelets as well. Shoulder straps are attached to his tunic. The tail of an animal, possibly a lion or a bull, hangs down from the back of his tunic, a sign of his antiquity. In his right hand he holds the ankh, symbol of life, and in his left hand the scepter, symbol of power. He is sometimes seated on a throne.

The composite Amen-Ra is often shown as having a human body with a hawk's head. Over the hawk's head is the solar disk encircled by a serpent (uraeus). As the people of different religious areas (called nomes) along the Nile considered different animals to be most sacred, Amen-Ra would be associated with that animal; thus he is also sometimes shown as an ape, a lion, a goose, or a crocodile, depending on the location. In a late form, he is depicted with the head of a ram.

Amen and his female counterpart, Amunet (Ament, Amaunet), formed one pair of the eight ancient creation gods and goddesses (together called the Ogdoad) of Hermopolis. When Amen is shown together with Amunet, he is usually portrayed with the head of a frog, and she has the head of a serpent. When Amen himself is depicted with the uraeus, Amunet has the head of a cat. Amen was also sometimes fused with the ithyphallic god Min as Min-Amen, Amsu, or Khem, and then he is shown with the symbolic flail over his upraised arm. As Min-Amen he symbolized the creative, generative power of male sexuality.

In late dynastic times, especially in the Ptolemaic period, figures of Amen-Ra were fashioned in bronze that incorporated all the important attributes of the god. In these figures he has the head of a bearded man, the body of a beetle, the wings of a hawk, the legs of a man with the toes and claws of a lion, four arms and four wings. The solar disk rests on ram's horns above him, and a lion-headed cobra is added to the design.

As he was invisible and associated with the air and with the breath of life everywhere, Amen's presence, the Egyptians believed, could be sensed in gusts of wind and in the fluttering pennants that priests attached to temple pylons.

Amen is thought to be of very ancient, pre-dynastic origin, perhaps as a god of agriculture, a local deity whose worship centered around the city of Thebes. A shrine to Amen was built in the Apt, the northern quarter of Thebes, during the 12th dynasty.

Amen's status as a god rose along with the political fortunes of his home city. Swiftly, in the space of about a hundred years, Amen went from local deity to creator of the universe, as Theban princes gained sovereignty. Thebes became the capital city of all Egypt and home of the pharaohs of the New Kingdom. Possibly in order to avoid theological rivalries or to overcome such rivalries, the priests of Thebes declared Amen to be one with the popular, widely worshiped creator sun god Ra, calling him Amen-Ra.

In this form he was now considered king of the gods, supreme deity of Egypt, source of all life in heaven, Earth, and the underworld. He became the guardian deity of the pharaohs of the 18th dynasty, and the ruling pharaoh was considered to be the god incarnate. Amen-Ra's power and might were described in many Egyptian hymns of praise, as for example in the 'Papyrus of Hu-nefer'. Great temples were built in his name at Luxor and Karnak. Centers of his worship also appeared in Hermonthis, Coptos, Panopolis, Hermopolis Magna, Memphis, Sais, Heliopolis, and Mendes, and the god was worshiped in the Egyptian dependencies of Syria, Nubia, and elsewhere. Only the god of the dead, Osiris, rivaled him in popular wo rship.

As Amen-Ra's priests became immensely wealthy and powerful, they declared Amen-Ra the "One One," (11) who had "no second." Indeed, Amen-Ra began absorbing the characteristics of all the gods, supposedly unifying and personifying them all. Egyptologists considered this one of the most serious attempts in antiquity to formulate a system of monotheism. At the end of the Ramesside dynasty, the office of pharaoh itself was conferred on the high priest of Amen-Ra, and the 21st dynasty is known as the dynasty of priest-kings.

The Greeks, who called him Ammon, identified Amen-Ra with their principal god, Zeus, and equated Min-Amen's flail with Zeus's thunderbolt. The Romans carried this identification to their chief deity, Jupiter. A shrine and oracle of Jupiter-Ammon was located in the Libyan city of Siwa. According to Herodotus, this oracle had been founded by a Theban priestess of Amen-Ra who had been abducted by Phoenicians and sold in Libya. The oracle was famous and much visited in classical times, consulted by such historic figures as Lysander, Hannibal, and Alexander the Great, who asked the oracle to tell him whether or not he was the god's own son.

NB : AMEN amends parli.AMEN.t by means of amendments amenable to aggie Magi of Kemptville and Olds.

Posted by Jerd Guillaume-Sam at 9:56 PM