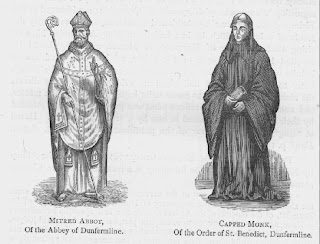 Abbe - Originally an abbot; but now an ecclesiastic devoted to teaching literature

Abbess- Governess of a nunnery

Abbey - Residence of monks or nuns. The dwelling of an abbot. A church attached to a monastery.
Abbot - Head of a society of monks

Jacob Abbot (born 1803, died 1879), a Congregational minister, and for four years professor of mathematics at Amherst college; was the author of the well known Rollo Books, Lucy Books, Marco Paul and other series. No books for children have been more popular or more widely read.
John Stevens Cabot Abbot (born 1805, died 1877), a brother of Jacob, and also a Congregational minister, was a popular historian, His best known works are History of Napoleon Bonaparte, History of Napoleon III and History of the Civil War.

Lyman Abbot, (Layman)the son of Jacob Abbot, was born in 1835, and spent all his life in the ministry, occupying pulpits in Terra Haute, Indiana; New York City, and recently that of the Plymouth church, Brooklyn, as the successor to Henry Ward Beecher. He has become widely known as the editor of the Christian Union, the author of several commentaries, and a frequent contributor to the magazines.
Posted by Jerd Guillaume-Sam at 12:09 AM