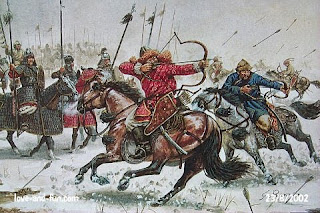 An Asiatic race, constituting one of the large division of mankind, including the Mongols proper, known as East Mongols and West Mongols and Bariats, and the Tartars, who form a distinct branch. The Kalmucks belong to the West Mongols. Mongolia inhabited by the east Mongols, is a part of the Chinese empire lying south of Siberia, and shut in by mountain ranges. The people lead a wandering life, dwelling in tents, and having flocks of sheep and herds of horses, cattle, camels and goats. They are mostly Buddhists in religion, and fond of making long pilgrimages. There are about 2,000,000 of them under Chinese rule. The Western Mongols have mingled with their Turkish neighbors so that it is difficult to number them. They are found in Russia, Astrakhan, Turkestan, Bokhara, Samarcand and the Crimea. The history of the Mongols begins with Genghis Kahn, born about 1160, who united the different tribes into one nation and led them out to the conquest. They overran Tartary, a large part of China, Persia, Russia and Afghanistan. Under his sons and their successors, other portions of China were conquered, the caliphs of Baghdad overthrown and Europe invaded as far as the Danube, making the Mongol empire at its height, the greatest the world has known. Kubla Khan, the grandson of Genghis Khan, established the first Mongol dynasty in China, which was finally overthrown by the Chinese in the 14th century. The Mongol kingdom, divided in the 13th century, was united again in the 14th century under Tamerlane, but after his death lost its power, until in the 17th century it became a part of the Chinese empire. The Mongolian language belongs to what is called the Turanian family. there is very little literature, what they posses being mostly translation from Chinese religious works; the original works being mainly accounts of the deeds of Genghis Khan and Tamerlane. See History of the Mongols, by Howorth; Among the Mongols, by Gilmour.
Posted by Jerd Guillaume-Sam at 4:43 AM