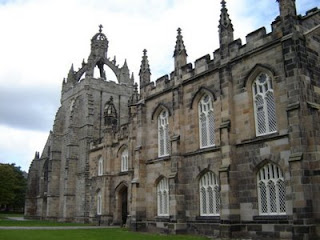 AB.ER.DEEN is the name of two cities in Scotland, called the Old and the New Towns, situated on the German Ocean 1. 45. W. long and 57. 11. N. lat. The old town lies about about mile to the north of the new, at the mouth of the river Don, over which is a fine bridge, of a single arch, which rests at both sides on two rocks. The old town was formerly the seat of the bishop, and had a large cathedral church, commonly called St. Macher's. This cathedral had anciently two rows of stone pillars across the church, and three turrets, rested upon an arch, supported by for pillars. In this cathedral was a fine library; but about the year 1560 it almost totally destroyed.
But the capital building is the King's college, on the south side of the town, which is a large and stately fabric. The steeple is vaulted with a double cross arch, above which is an imperial crown, supported by eight stone pillars, and closed with a globe and two gilded crosses. In the year 1631 this steeple was thrown down by a storm, but was soon after rebuilt in a more stately form. This college was founded by Bishop Elphinston in the year 1500; but James IV. claimed the patronage of it, and it has since been called the King's College. This college, and the Marishall college in the new twon, form one university, called the University of King Charles.

The new town is the capital of the shire of Aberdeen. For largeness, trade, beauty, it greatly exceeds any town in the North. It stands upon a hill or rising ground. The buildings are generally four stories high, and have, for the most part, gardens behind them, which gives it a beautiful appearance. On the high street is a large church, which formerly belonged to the Franciscans. This church was begun by Bishop William Elphinston, and finished by Gavinus Dunbar, Bishop of Aberdeen, about the 1500. Bishop Dunbar is said likewise to have built the bridge over the Dee, which consists of seven arches. The chief public building in the new town is the Marishall college, founded by George Keith Earl of Marshall, in the year 1593; but has since been greatly augmented with additional buildings. In both the Marishall and King's college the languages, mathematics, natural philosophy, divinity, etc, are taught by very able professors.


By the way Arthur C. Clarke went to Kings College
Posted by Jerd Guillaume-Sam at 1:49 AM