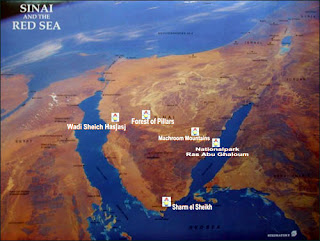 (notice the peninsula's resemblance to a peace symbol made by the pointer and middle finger Peace bro~Peas bra)
Sinai is a mountain in the northwestern part of Arabia, known as the place where Moses received the tables of stone, inscribed with the ten commandments. The mountain is a single peak in the great rocky mass which almost fills the peninsula of Sinai, a point of land shut in between the two arms of the Red Sea, the Gulf of Suez and Gulf of Akaba. There are three separate mountains, Mount Katherine being usually thought to be indicated by the name Sinai. This mountain has two peaks, the northern one, known as Mount Horeb, and the southern one, called the Mountain of Moses. This southern peak is generally agreed upon as the place of the giving of the Law, though it is still disputed. At its foot is the Church of St. Catherine, built about 527 by the Emperor Justinian; a little higher up, the chapel of St. Elias and on the summit a little pilgrim church. The whole peninsula, as well as the bold, jagged mountains, have a stern, treeless aspect, though palms, acacias and tamarisks grow in the ravines. The Arabs range over the region with their sheep and goats. There are many caves among the mountains which have been the abodes of hermits, and many inscriptions on the rocks which date back to the early Christians. See Sinai and Palestine, by Stanley; Desert of the Exodus.

Palms are a natural order of useful and important plants, generally with tall and slender stem, without branches, and having the compound leaves issuing directly from the top. The outer case of the stem is covered by a hard, sandy polished casing, enveloping a soft, pulpy and fibrous interior which can be easily removed. They are natives of the tropical regions, and when young the stems form a nutritious food, and when older some yield a farinaceous substance, while the young bud on the end is composed of juicy leaves which are esteemed a delicate vegetable. Many, again, yield a sweet sap which is made into sugar, drinks, wines, spirits and vinegar. The leaves are made into thatch roofs, mats, baskets, hats, umbrellas, fans, thread, cord and clothing, and in some of the old eastern countries the records are written on dried leaves. Some of the principal species and their characteristics are, the chamaedorea, a native of Brazil, which is used for bridges, the ash of its burnt fruit for salt and produces a nourishing cabbage; the betel nut palm; the cabbage palm; the sugar palm, from which a brown sugar is made and whose distilled sap forms an intoxicating drink; the sago palm, from whose stem the sago of commerce is taken, and many others. See A Popular History of Palms, by Seeman.

Palmetto, the American species of palm, is found in California and Florida, often growing to the height of 50 feet and having leaves 5 feet long. The most important is the cabbage palmetto. Other kinds of this species grow in the Bermudas, along the Mediterranean shores and in Arabia. The characteristics are the same as those of the palm, only that they are not so tall. Palm Sunday, the Sunday before Easter, takes its name from the usage of blessing branches of the palm, or of other substituted trees, and carrying them in the procession in memory of the triumphal entry of Christ into Jerusalem. The custom can be traced back to the 8th century. In the Roman Catholic Church the priest blesses the branches and hands them to the worshipers as they pass out, and when the hymn, "All glory praise and honor" is sung by the choir and the congregation outside, the doors are opened and the people return. The branches are taken home and burned and the ashes used on Ashe Wednesday.

1 Now when they drew near Jerusalem, and came to Bethphage, at the Mount of Olives, then Jesus sent two disciples, 2 saying to them, “Go into the village opposite you, and immediately you will find a donkey tied, and a colt with her. Loose them and bring them to Me. 3 And if anyone says anything to you, you shall say, ‘The Lord has need of them,’ and immediately he will send them.”
4 All this was done that it might be fulfilled which was spoken by the prophet, saying:
5 “ Tell the daughter of Zion,

‘ Behold, your King is coming to you,
Lowly, and sitting on a donkey,
A colt, the foal of a donkey.’”


“ Hosanna to the Son of David!

‘ Blessed is He who comes in the name of the LORD!’
Hosanna in the highest!”

10 And when He had come into Jerusalem, all the city was moved, saying, “Who is this?”
11 So the multitudes said, “This is Jesus, the prophet from Nazareth of Galilee.”

Jesus entry to town was on a d(o)nk(e)y the original vehicle.

Palmer from the Latin, palmifer, a palm bearer. A name given in the time of the Crusades to a pilgrim, who, coming back from the holy war after having accomplished his vow of pilgrimage, exhibited upon his return home a branch of palm bound round his staff in token of it.

Edward Henry Palmer, was born at Cambridge, on August 7, 1840, and while a boy learned the Gypsy language. Afterward he acquired Italian and French. In 1860 he began the study of the Orient at Cambridge, and in 1867 graduated with third-class honors in classics. In 1868-70 he was working for the Palestine exploration surveying Sinai, and in 1871 became professor of Arabic in Cambridge. In 1882 he was sent by the government to win the Sinai tribes over to Britain, and prevent the destruction of the Suez canal by Arabs, and made two expeditions, on the second of which from Suez with Captain Gill and Lieutenant Charrington he was betrayed and murdered at Wady Sudr on Aug. 11, 1882. His remains and those of his companions now repose in St. Paul's. See his Life by W. Besant.

Erastus Dow Palmer was an American sculptor born in Pompey, New York, April 2, 1817. He was a joiner by trade, and made carvings first of animals and leaves in wood. Seeing a cameo head, he cut on a shell a portrait of his wife and his success induced him to try working in marble. Two bas-reliefs, Morning and Evening , The Sleeping Peri; The Angel at the Sepulcher, in the cemetery at Albany; Immortality, Faith and Sappho, also bas-reliefs, are some of his best known works. He has executed busts of Alexander Hamilton, Washington Irving, Commodore Perry and others, and a statue of Robert Livingstone for the state of New York, cast in bronze. The Landing of the Pilgrims, in the capitol at Washington, is one of his largest works.

Ray Palmer, an American clergyman, was born at Little Compton, Rhode Island, Nov. 12, 1808. He graduated at Yale College, and studied theology, beginning his work as a minister at Bath, Maine. Most of his life was spent in Albany, New York, where he was one of the most prominent clergymen of the Congregational church. He is best known by his hymns, some of which are found in nearly every church collection, and one of which, My Faith Looks Up to Thee, is widely used and very popular. Besides many hymns, he has written Closet Hours; Remember Me, or the Holy Communion; Home, or the Unlost Paradise, a poem; and Earnest Words. He died in March 29,1887.

Posted by Jerd Guillaume-Sam at 8:53 AM