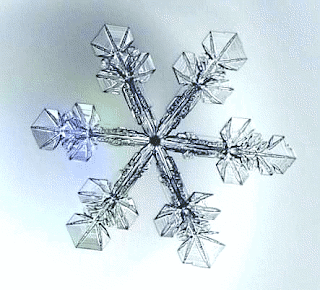 Snow is the white mass formed of crystals made by the freezing of the vapor in the air. Hail and sleet are frozen rain, but snow is a collection of ice around the dust particles in the air. The snow crystals are very beautiful and various, more than 1,000 forms have been noticed. They are divided into five classes; the first are in thin plates of stars of six rays; in the second there is a solid center with needle shaped crystals projecting in all directions; the third class is made up of three-sided or six-sided prisms; the fourth class is six-sided pyramids, and the fifth class is formed by prisms cut by plates. The last two classes are rare. There is probably some rule for the formation of the different forms of crystals, as the flakes of each shower are usually alike. The flakes vary in size from an inch to one-tenth of an inch in diameter. The largest amount of snow falls where there is most moisture in the air; as in New England the yearly average is from four to seven feet, while in the same latitude in the western states it is only two feet. In the Arctic regions in Siberia, the fall of snow does not exceed that of New England, but it lies unmelted longer. Snow rarely falls south of 40 degrees of latitude. Fresh fallen snow is very light, a foot of it giving only an inch of water when melted. The snow on mountains that almost below the freezing point, is packed by its own weight, and by the freezing and thawing of the surface, until it hardens with icy glaciers. It it falls before hardening it forms an avalanche. Snow retains heat, being a non-conductor, and so is of great use in protecting the soil and plants from severe cold. Red and green snow, as seen in the Arctic regions, is produced by a very small red plant, which sometimes colors the snow for several feet in depth. The usual white color is due to the light from the many angles of the ice crystals. The snow line, or line of perpetual snow, is the height above which the snow never entirely melts away. It varies with the climate and the season. It is usually higher on the south side than on the north side of a mountain, on the east than on the west and higher inland than on the seashore.
Posted by Jerd Guillaume-Sam at 7:50 AM