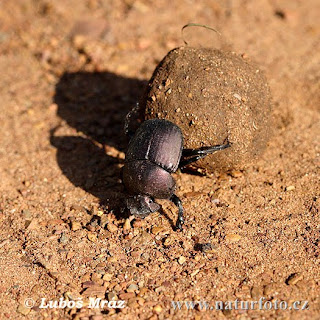 Scarabeus(scar'-a-be-us), is the name of a beetle, well know for its habit of rolling balls of manure to its hole. The ball is used for food, and sometimes last a fortnight. Sometimes they are used as receptacles for an egg an then rolled by the parents to a place of safety. The scarabeus was worshiped by the Egyptians, and for different species are found sculptured on their monuments, and gems were fashioned in their shape. The number of its toes thirty, symbolized the days of the month; the time of laying its eggs, the lunar month; the movement of the ball, the action of the sun on the earth. These were some of the mystical ideas connected with it. The custom of engraving scarab gems was also common with the Greeks and Etruscans.
Posted by Jerd Guillaume-Sam at 10:09 AM