Hyperion and Theia unite and produce Eos (Aurora or Dawn), the goddess of the morning. She was the daughter of Hyperion, and mother of the winds. She loved Tithonous, for whom she obtained from the gods immortality, but forgot to ask for perpetual youth. She lived with him at the end of the earth, and when he grew old, nursed him until at last his voice disappeared and his body became shriveled, when she changed him into a cricket. Appearing in the grey twilight of morning, Aurora lifts with rosy fingers the veil of Night, sheds a radiant lustre over the earth, and disappears at the entrance of Helios. Aurora is sometimes represented in a saffron colored robe, with a wand or torch in her hand and a brilliant sparkling star on her forehead, emerging from a golden palace and ascending her chariot; sometimes in a flowing veil which she is in the act of throwing back, opening the gates of the morning. 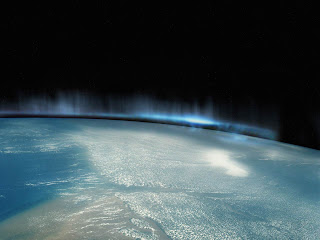 Auro'ra Borea'lis is from two Latin words, and means northern dawn. It is also called Northern Lights. They are the bright clouds of light often seen in the northern sky at night. It is also seen in the far south, when it is called Southern Lights. The upper edge of the aurora cloud is a whitish arch, with a touch of green and a very luminous. The lower part is often dark or thick. From the upper part of the cloud streams of light shoot up in columns. The aurora sometimes lasts a few hours, sometimes the whole night. It is probably brought about by electricity; perhaps by the passage of electricity through very thin air at a considerable distance above the earth's surface. During the winter in the Arctic zone, the people are without the light of the sun for months together, and their long, dreary night is relived by this beautiful phenomenon.

Posted by Jerd Guillaume-Sam at 3:24 PM