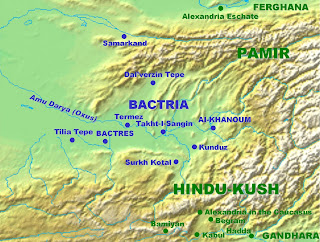 According to traditions of hoary antiquity preserved in the sacred books of the Parsees, and in the Shah Nameh, the immoral poem of Ferdoosee, there existed in the most remote ages , with sacerdotal institutions akin to those of India, a mighty and extensive empire in Bactria or Eastern Persia. Grecian writers confirm this account, and it is farther proved by the route of the Caucasian race, who, in their progress along the mountains, must have been attracted by these fertile regions, abounding in every production, protected by lofty impassable mountains to the north, and bordering on the realms of India and Babylonia. The branch of the Caucasian stem, called the Indo-Persian race, spread over Iran, the country between Babylonia and India. Its chief seat was Bactria. Here, according to Persian tradition, ruled Cayumarath, the first of men, or of kings, and his descendants till Jemsheed was overthrown by the Aramaean Zobak. The system of religion named from Zoroaster prevailed in Bactria, and the sacerdotal caste stood in rights and privileges nearly on a par with the Brahmins of India, who, probably, possessed originally a similar institution. The idolatrous Aramaean priesthood united itself with that of Bactria; but when Aramaean or Babylonian dominion sank, and the Iranian revived in the person of Feridoon, the old religion recovered its dominion. Changes of dynasty effect it not; it passed to the Medes and Persians, and still was flourishing when the disciples of Mohammed extinguished it in blood; and it yet lingers among the Parsees of India, the descendants of those who sought refuge in that country from persecution. But the simple religion of Zoroaster, which worshiped under the emblem of light and fire the Author of light and happiness, but not the debasing effects of the intricate idolatry and metaphysics of India; and if Iran fell beneath foreign conquerors, the fault was not in her system of religion.
Posted by Jerd Guillaume-Sam at 1:44 PM