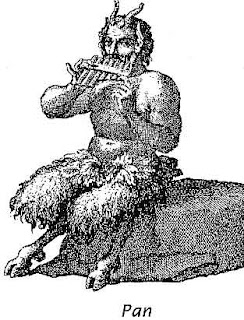 Various origins have been given to Pan (or the Universe), one of which is, that he sprang from Chaos; that is to say, Chaos contained the seeds of all things.

Among the most learned of the ancients, Pan was considered as one of the oldest divinities; and according to the Egyptians, and the most learned of the Grecian sages, he had neither father nor mother, but sprang from Demogorgon (the genius of the earth) at the same instant with the fatal ParcAE. A beautiful way of saying that the universe derived its origin from a power unknown to them, and was formed according to the unalterable relations, and eternal aptitude of things, as were the Fates, daughters of Necessity.

The figure of pan represents the universe, and is a delineation of nature and the rough face which it first wore, while his spotted robe of leopard's skin represents the starry heavens. His person is a compound of various and opposite parts, rational and irrational, a man and a goat ; so is the world; - an all governing mind and heterogeneous, prolific elements pervade and constitute it.

Pan's symbol of the pipes is most eloquently expressive of nature's divine, harmonious constitution, and of the order and measure that govern all her works, producing that solemn movement called the music of the spheres; imperceptible indeed to our material organ, but so delightful and pleasing to the ear of the mind. This wondrous reed on which he incessantly plays, is composed of seven pipes, unequal among themselves, but fitted together in such just proportion as to produce the most unerring and melodious notes, calling forth the echo, which poets have made the object of his love.

The worship and the different of functions of Pan, were derived from the mythology of the Egyptians. This deity was one of the eight great gods that they worshiped, ranking before the other gods, which the Romans called Consentes. The regarded him as the emblem of fecundity, and principle of all things; therefore the Greeks gave him the appellation of Pan. He was worshiped with great solemnity at Mendes.

By the Arcadians he was venerated as the chief of the rural deities. Herdsmen and shepherds are said to have dreaded the sight of Pan, yet they regarded him as the tutelary deity of themselves, and of their flocks and herds, and brought him frequent offerings of milk and honey. Sacrifices were offered to him in a deep cave in the midst of the wood. The Athenians had a statue of him like that of Mars, and in some antique gems and sculptures his figure is nearly as formidable as that of Medusa.

At Rome, there was a yearly festival celebrated in honor of Lupercus, or the Grecian Pan, with whom he was identified. This celebration took place in the 15th of Feburary, and was called Lupercalia. The priests who officiated, and who were dedicated to the service of Pan, were called Luperci. This order of priest was the most ancient and respectable of all the sacerdotal offices. It was divided into two separate colleges, called Fabiani and Quintilliani, from Fabius and Quintilius, two of the high priests. The former was instituted in honor of Romulus, and the latter of Remus.

A goat was sacrificed to Pan, to which a dog was added, because as god of shepherds he protected the sheepfold from the devouring wolf. The priest touched with a bloody knife the foreheads of two illustrious youths, who were obliged to smile during ceremony; the blood was then wiped off with a bit of wool dipped in milk. After this, the skins of the victims were cut into thongs, with which whips were made for the youths, who ran about the streets, using them freely on all whom they met.

According to Baronius, Pope Gelasius abolished the Lupercalia in the year 469 of the Christian era.

Posted by Jerd Guillaume-Sam at 7:57 PM