Zennaar. The sacred cord used in the Hindustanee initiation, and which writers on ritualism have compared to the Masonic apron. Between eight and fifteen years of age, every Hindu boy is imperatively required to receive the investiture of the zennaar. The investiture is accompanied ma by many solemn ceremonies of prayer and sacrifice. After the investiture, the boy is said to have received his second birth, and from that time a Hindu is called by a name which signifies "twice born."

Coleman (Mythology of the Hindus, p.155) thus describes the zennar:

"The sacred thread must be made by a Brahman. In consists of three strings, each ninety-six hands (fort-eight yards), which are twisted together: it is then folded into three, and again twisted; these are a second time folded into the same number, and tied at each end in knots. It was worn over the left shoulder (next the skin, extending halfway down the right thigh) by the Brahmans, Ketries, and Vaisya castes. The first are usually invested with it at eight years of age, the second at eleven, and the Vaisya at twelve. The period may, from especial causes, be deferred; but it is indespensable that it should be recieved, or the parties omitting it become outcastes." 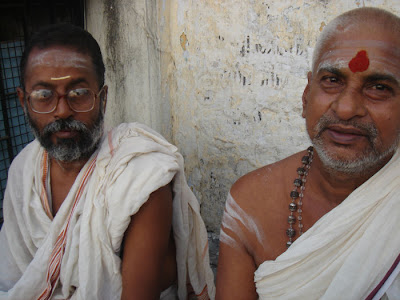 The inhabitants of India originally practiced the Patriarchal religion. Even the later worship of Vishnu was cheerful and social; accompanied with the festive song, the sprightly dance, and the resounding cymbal, with libations of milk and honey, garlands, and perfumes from aromatic woods and gums.

There perhaps the Mysteries commenced; and in them, under allegories, were taught the primitive truths. We cannot, within the limits of this lecture, detail the ceremonies of initiation; and shall use general language, except where something from those old Mysteries still remains in Masonry.

The Initiate was invested with a cord of three threads, so twined as to make three times three, and called zennar. Hence comes our cable-tow. It was an emblem of their tri-une Deity, the remembrance of whom we also preserve in the three chief officers of our Lodges, presiding in the three quarters of that Universe which our Lodges represent; in our three greater and three lesser lights, our three movable and three immovable jewels, and the three pillars that support our Lodges.

The Indian Mysteries were celebrated in subterranean caverns and grottos hewn in the solid rock; and the Initiates adored the Deity, symbolized by the solar fire. The candidate, long wandering in darkness, truly wanted Light, and the worship taught him was the worship of God, the Source of Light. The vast Temple of Elephanta, perhaps the oldest in the world, hewn out of the rock, and 135 feet square, was used for initiations; as were the still vaster caverns of Salsette, with their 300 apartments.

The periods of initiation were regulated by the increase and decrease of the moon. The Mysteries were divided into four steps or Degrees. The candidate might receive the first at eight years of age, when he was invested with the zennar. Each Degree dispensed something of perfection. “Let the wretched man,” says the Hitopadesa, “practice virtue, whenever he enjoys one of the three or four religious Degrees; let him be even-minded with all created things, and that disposition will be the source of virtue.”

After various ceremonies, chiefly relating to the unity and trinity of the Godhead, the candidate was clothed in a linen garment without a seam, and remained under the care of a Brahmin until he was twenty years of age, constantly studying and practicing the most rigid virtue. Then he underwent the severest probation for the second Degree, in which he was sanctified by the sign of the cross, which, pointing to the four quarters of the compass, was honored as a striking symbol of the Universe by many nations of antiquity, and was imitated by the Indians in the shape of their temples.

Then he was admitted to the Holy Cavern, blazing with light, where, in costly robes, sat, in the East, West, and South, the three chief Hierophants, representing the Indian tri-une Deity. The ceremonies there commenced with an anthem to the Great God of Nature; and then followed this apostrophe: “O mighty Being! greater than Brahma! we bow down before Thee as the primal Creator! Eternal God of Gods! The World’s Mansion! Thou art the Incorruptible Being, distinct from all things transient! Thou art before all Gods, the Ancient Absolute Existence, and the Supreme Supporter of the Universe! Thou art the Supreme Mansion; and by Thee, O Infinite Form, the Universe was spread abroad.”

The candidate, thus taught the first great primitive truth, was called upon to make a formal declaration, that he would be tract-able and obedient to his superiors; that he would keep his body pure; govern his tongue, and observe a passive obedience in receiving the doctrines and traditions of the Order; and the firmest secrecy in maintaining inviolable its hidden and abstruse mysteries. Then he was sprinkled with water (whence our baptism); certain words, now unknown, were whispered in his ear; and he was divested of his shoes, and made to go three times around the cavern. Hence our three circuits; hence we were neither barefoot nor shod: and the words were the Pass-words of that Indian Degree.

Posted by Jerd Guillaume-Sam at 6:18 PM