The River of Pain 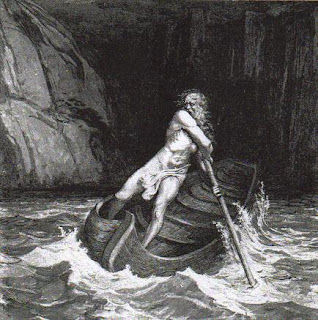 In ancient mythology Acheron was known as the river of pain. It was a river of the lower world, around which hovered the shades of the departed, and across whose waters the ferryman, Charon, piloted those who were permitted to enter the realm of the dead. Acheron was also a general name for Hades.

Charon, a god of Hell, and son of Erebus and Night, conducted the souls of the dead in a boat over the rivers Styx and Ache.ron, to the infernal regions. But he conveyed no one without their tribute, and it was a custom among the ancients in preparing the dead for burial, to place a piece of money under the tongue for Charon.

When a departed soul presented herself for a passage in his boat he first inquired whether the traveler could furnish the requisite fee; and if it should happen that the obolus had been forgotten, the poor soul was left to wander on the gloomy shores a hundred years before being conducted over the river; and such as had not been honored with a funeral, were subjected to the same penalty.

Among the ancients, it was considered an inexpressible cruelty to deny the dead a burial; and for this reason, all great commanders were careful, after a battle, to inter the bodies of those whose lives had been lost in their service.

No living person was received into Charon's boat, unless he could show a golden bough which had received from the Sybil as a passport. Yet it is said that AEneas by his piety, Hercules and Theseus by their valor, and Orpheus by his music, obtained the privilege of passing to and fro in old Charon's ferry boat.

Charon is represented as an old man with a ragged garment, a long gray neglected beard, and his forehead lined with wrinkles.
Posted by Jerd Guillaume-Sam at 11:03 PM