The word ass written in French is "cul". Cul is linked to the English word "cull" which means to "gin". It means to divide.

Saint Aurelius Augustine, a famous preacher and scholar, was born at Tagaste, near Carthage,(age of the Car) Africa, Nov. 13, 354 A.D. He had the best of schooling, the later part of it at Carthage, where he fell into bad habits. A passage of Cicero which he chanced to read one day, first stirred his deeper being into life. For the next ten years he was an earnest student of philosophy. In 383 he went to Milan, Italy, as teacher of rhetoric. Here he became a close friend of the eloquent preacher, Ambrose, then bishop of Milan. Augustine often went to hear his friend preach. His mother, Monica, was an earnest Christian, and her influence and that of his friend brought him to accept Christianity. In 396 he was made bishop of Hippo, in North Africa. The next year he brought out his Confessions, some passages of which, for beauty, can only be compared to the Psalms of David. His most powerful work is his City of God, A great thinker and writer, no man's influence on the church has been greater. St. Augustine, was sent with forty monks into England, to evangelize the country. According to Masonic tradition he placed himself at the head of the corporations of builders , and was recognized as their Grand Master. He died 430 A.D.
When St. Augustine came over, in the beginning of the sixth century, to Britain, for the purpose of conver 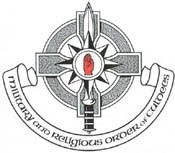 t the natives to Christianity, he found the country already occupied by a body of priests and their disciples, who were distinguished for the simple apostolic religion which they professed. These were the Cul.dees, a named said by some to be derived from Cultores Dei, or worshipers of God; but by others, with, perhaps, more plausibility from the Gaelic, Cuidiech, which means a secluded corner, and evidently alludes to their recluse mode of life. The Culdees are said to have come over into Britain with the Roman legions; and thus it has been conjectured that these primitive Christians were in some way connected with the Roman Colleges of Architects, branches of which body, it is well known, everywhere accompanied the legendary armies of the empire. The chief seat of the Culdees was in the island of Iona, where St. Columba, coming out of Ireland, with twelve brethren, in the year 563, established the principle monastery. At Avernathy, the capital of the kingdom of the Picts, they founded another in the year 600, and subsequently other principal seats at Dunkeld, St. Andrew's, Brechin, Dunblane, Dumferline, Kirkaldy, Melrose, and many other places in Scotland. They sought chiefly to civilize and socialize mankind. The Culdees had organized within themselves, and as part of their social system, Corporations of Builders; and that they exercised the architectural art in the construction of many sacred edifices in Scotland, Ireland, and Wales, and even in other countries of Northern Europe. The Culdees were opposed and persecuted by the adherents of St. Augustine, and were eventually extinguished in Scotland. But their complete suppression did not take place until about the fourteenth century.
Posted by Jerd Guillaume-Sam at 11:59 PM