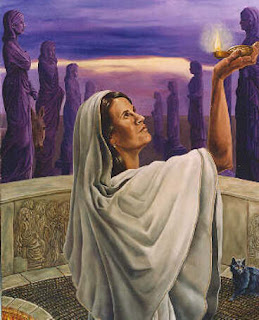 Vesta in Roman mythology was the goddess of fire and the domestic hearth. The guardian ship of the sacred fire in her temples was given to the priestesses called Vestal Virgins, at first hour, but afterwards six. They were from six to ten years old and spent thirty years in the service, the first ten in learning their duties; the second ten in acting as priestesses and guarding the sacred fire which must not be allowed to go out; and the last ten in teaching the new priestesses. If a vestal virgin violated her vow, she was stoned to death or buried alive. They lived in great splendor at the public expense, had the best seats in the theaters, and rode in state preceded by a lictor. In Greece the priestesses of Vesta, or Hestia, were widows. On the first day of March, the Latin New Year's Day, the sacred fire of Vesta was renewed. The Vestalia, the chief festival in honor of Vesta, was celebrated June 9, after which the temple was closed for five days for cleansing. In private houses the feast was kept by eating fish, bread and herbs before the hearth and the images of Penates or household gods. The worship of Vesta dies out in the 4th century after the adoption of Christianity by Constantine.

Vestal - 1. Pertaining to Vesta, a virgin goddess of fire among the Romans. 2. Pure; chaste. A virgin consecrated to Vesta.

Vested - Not in a state of contingency; fixed

Vestibule - [Lat. vestibulum.] An antechamber between the hall and the outer doors; a porch. SYN. - all; passage. - A vestibule is a small apartment within the doors of a building: a hall is the first large apartment beyond the vestibule, and, in this country, is usually long and narrow, serving as a passage to the several apartments.

Vestige - [Lat. vestigium.] Mark of the foot left on the earth; a track or footstep; sign.
SYN - Trace. Vestige is literally a footprint; a trace is something drawn out in a line. Vestige, therefore, always supposes something left behind, while a trace is a mere indication that something has been present or is present; as traces of former population; a trace of poison in a given substance.

Vestry - [Lat. vestiarium; vestis, a garment.] 1. A room in a church, in which the sacerdotal vestments, &c., are kept. 2. (Episcopal Church.) A committee which manages the temporal concerns of parish.

Posted by Jerd Guillaume-Sam at 2:00 PM