Who was Karl Marx? 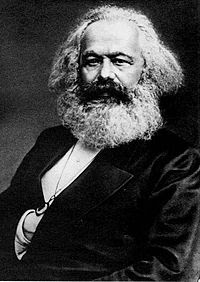 
You'll find in the writings of Karl Marx, which should be studied by people because he was taught by the best bankers in history. Karl Marx's when through the whole necessity of using terror and why it was necessary, why it worked on whole populations, because he knew that the job of communism was to centralize a government. That was the first thing they had to do. That's why Karl Marx congratulated Lincoln after the Civil War in America, he congratulated him and you'll find that in the Congressional Records: Karl Marx's letters to Lincoln for centralizing a powerful government over the Americas.
Posted by Jerd Guillaume-Sam at 11:01 PM