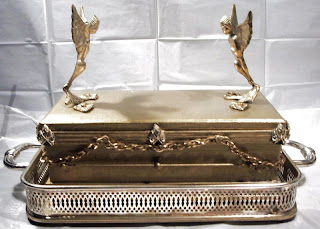 The Ark of the Covenant or of the Testimony was a chest originally constructed by Moses at God's command, (Exod. xxv. 16,) in which were kept the two tables of stone, on which were engraved the ten commandments. It contained, likewise, a golden pot filled with manna, Aaron's rod, and the tables of the covenant. It was at first deposited in the most sacred place of the tabernacle, and afterwords placed by Solomon in the Sanctum Sanctorum of the Temple, and was lost upon the destruction of that building by the Chaledeans. The later history of this ark is buried in obscurity. It is supposed that upon the destruction of the first Temple by the Chaldeans, it was carried to Babylon among the other sacred utensils which became the spoil of the conquerors. But of its subsequent fate all traces have been lost. It is, however, certain that it was not brought back to Jerusalem by Zerrubbabel. The Talmudists say that there were five things which were the glory of the first Temple that were wanting in the second; namely the Ark of the Covenant, the Shekinah or Divine Presence,(DNA) the Urim and Thummim the holy fire upon the altar, and the spirit of prophecy(the plan). The Rev. Salem Towne, it is true, has endeavored to prove, by a very ingenious argument, that the original Ark of th Covenant was concealed by Josiah, or by others, at some time previous to the destruction of Jerusalem, and that it was afterwords, at the building of the second Temple, discovered and brought to light. But such a theory is entirely at variance with all the legends of the degree of Select Master, and of the Royal Arch Masonry. To admit it would lead to endless confusion and contradictions in the traditions of the Order. It is, besides, in conflict of the opinions of the Rabbinical writers and every Hebrew scholar. Josephus and the Rabbins allege that in the second Temple the Holy of Holies was empty, contained only the Stone of Foundation which marked the place which the ark should have occupied.

The ark was made of shittim wood, overlaid, within and without, with pure gold. It was about three feet nine inches long, two feet three inches wide, and of the same extent in depth. It had on the side two rings of gold, through which, when necessary, it was borne by the Levites. Its covering was of pure gold, over which were placed two figures called cherubim, with expanded wings. The covering of the ark was called kaphieret, from kaphar, "to forgive sin," and hence its English name of "mercy seat," as being the place where the intercession for sin was made.

The researches of archaeologists in the last few years have thrown much light on the Egyptian Mysteries. Among the ceremonies of that ancient people was one called the Procession of Shrines, which is mentioned in the Rosetta stone, and depicted on the temple walls. One of these shrines was an ark which was carried in procession by the priests, who supported it on their shoulders by staves passing through metal rings. It was thus brought into the Temple and deposited on a stand or altar, that the ceremonies prescribed in the ritual might be performed before it. The contents of these arks were various, but always of a mystical character. Sometimes the ark would contain symbols of Life and Stability; sometimes the sacred beetle, the symbol of the Sun; and there was always a representation of two figures of the goddess Theme or Truth and Justice, which overshadowed the ark with their wings. These coincidences of the Egyptian and Hebrew arks must have been more than accidental. 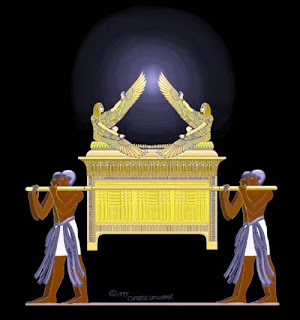 Posted by Jerd Guillaume-Sam at 3:59 PM