Structure of the Atom 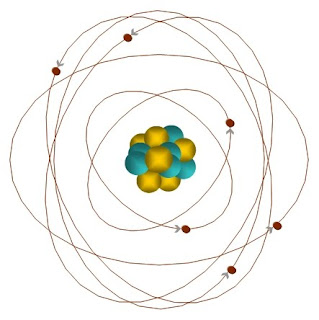 All matter is made up of atoms. An atom is like a tiny solar system. In the center of the atom is the nucleus which is a cluster of protons and neutrons. The protons have a positive electric charge while the neutrons are electrically neutral. The nucleus makes up almost all of an atom's mass or weight. Whirling at fantastic speeds around the nucleus are smaller and lighter particles called electrons which have a negative electric charge.

An atom has the same number of electrons (- ve charge) and protons (+ ve charge) to make the atom electrically neutral. An extremely powerful force, called the nuclear force, holds the protons together in the nucleus as they naturally repelled one another electrically.

The atoms of each chemical element have a different nucleus. An atom of hydrogen has one proton and no neutrons. An atom of nitrogen has 7 protons and 7 neutrons. Heavy elements have a large number of protons and neutrons. For example, the most common isotope of uranium, uranium-238 has 92 protons and 146 neutrons in its nucleus.

The drawing on the left shows a carbon atom with 6 protons, 6 neutrons and 6 electrons.
Posted by Jerd Guillaume-Sam at 4:22 AM