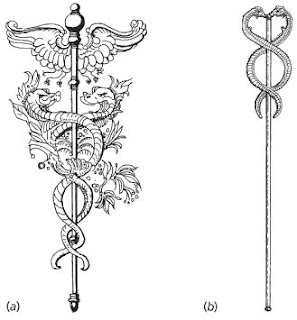 Rod. The rod or staff is an emblem of power either inherent, as with a king, where it is called a scepter, or with an inferior officer, where it becomes a rod, verge, or staff. The Deacons, Stewards, and Marshal of a Lodge carry rods. The rods of the deacons, who are the messengers of the Master and Wardens, as Mercury was of the gods, may be supposed to be derived from the caduceus, which was the insignia of that deity, and hence the Deacon's rod is often surmounted by a pine cone. The Steward's rod is in imitation of the white staff borne by the Lord High Steward of the king's household. The Grand Treasurer also formerly bore a white staff like that of the Lord High Treasure. The Marshal's baton is only an abbreviated or short rod. It is in matters of state the ensign of a Marshal of the army. The Duke of Norfolk, as hereditary Earl Marshal of England bears two batons crossed in his arms. Mr. Thynne, the antiquary, says (Antiq. Disc., ii. 113,) that the rod "did in ages, and yet doth amongst all nations and amongst all officers, signify correction and peace; for by correction follows peace, wherefore the verge or rod was the ensign of him which had authority to reform evil in war and peace, and to see quiet and order, observed amongst the people; for therefore beareth the king his scepter. The church hath her pastoral staff; and other magistrates which have the administration of justice or correction, as have the judges of the law and the great officers of the prince's house, have also a verge or staff assigned to them." We thus readily see the origin of the official rods or staves used in Masonry.

Aaron's Rod. The method by which Moses caused a miraculous judgment as to which tribe should be invested with the priesthood, is detailed in the Book of Numbers (ch. xvii.). He directed that twelve rods should be laid up in the Holy of Holies of the Tabernacle, one for each tribe; that of Aaron of course represented the tribe of Levi. On the next day these rods were brought out the exhibited to the people, and while all the rest remained dry and withered, that of Aaron alone budded and blossomed and yielded fruit. There is no mention in the Pentateuch of this rod having been placed in the ark, but only that it was put before it. But as St. Paul, or the author of the epistle to the Hebrews, asserts that the rod and the pot of manna were both within the ark, Royal Arch Masons have followed this later authority. Hence the rod of Aaron is found in the ark; but its import is only historical, as if to identify the substitute ark as a true copy of the original, which had been lost. No symbolical instruction accompanies its discovery. 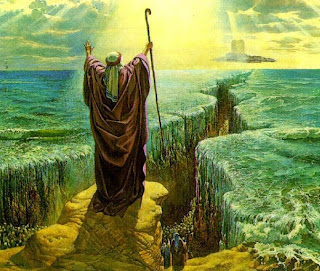 Pot of Manna. Among the articles laid up in the ark of the covenant by Aaron was a pot of manna. In the substitute ark commemorated in the Royal Arch degree, there was, of course, a representation of it. Manna has been considered as a symbol of life; the transitory but the enduring one of a future world. Hence the Pot of Manna, Aaron's rod that budded anew, and the Book of the Law, which teaches Divine Truth, all found together, are appropriately considered as the symbols of that eternal life(genetic engineering) which is the design of the Royal Arch degree to teach.

Those Tablets had information of the High Hidden Sciences and were passed down from Patriarch to Patriarch, Abraham to Enoch to Noah to Moses etc

Now why was the first one one a woman?

The mystical philosophy or theosophy of the Jews is called the Kabbala. The word is derived from the Hebrew Kabal, signifying to receive, because it is the doctrine received from the elders. It has sometimes been used in an enlarged sense, as comprehending all the explanations, maxims, and ceremonies which have been traditionally handed down to the Jews; but in that more limited acception, in which it is intimately connected with the symbolic science of Freemasonry, the Kabala may be defined to be a system of philosophy which embraces certain mystical interpretations of Scripture, and metaphysical speculations concerning the Deity, man, and spiritual beings. In these interpretations and speculations, according to the Jewish doctors were enveloped the most profound truths of religion, which, to be comprehended by finite beings, are obliged to be revealed through the medium of symbols and allegories. Buxtorf (Lex. Talm.,) defines the Kabbala to be a secret science, which treats in a mystical and enigmatical manner of things divine, angelical, theological, celestial, and metaphysical; the subjects being enveloped in striking symbols and secret modes of teaching. Much use is made of it in the high degrees, and entire Rites have been constructed on its principles. Hence it demands a place in any general work on Masonry.
In what estimation the Kabbala is held by Jewish scholars, we may learn from the traditions which they teach, and which Dr. Ginsburg has given in his exhaustive work, (Kabbalah, p. 84,) in the following words: "The Kabbalah was first taught by God himself to a select company of angels, who formed a theosophic school in Paradise. After the fall, the angels most graciously communicated this heavenly doctrine to the disobedient child of earth, to furnish the protoplast with the means of returning to their pristine nobility and felicity. From Adam it passed over to Noah, and then to Abraham, the friend of God, who emigrated with it to Egypt, where the patriarch allowed a portion of this mysterious doctrine to ooze out. It was in this way that the Egyptians obtained some knowledge of it, and the other Eastern nations could introduce it to their philosophical systems. Moses, who was learned in all the wisdom of Egypt, was initiated into it in the land of his birth, but became most proficient in it during his wanderings in the wilderness, which he not only devoted to it the leisure hours of the whole forty years, but received lessons in it from one of the angels. By the aid of this mysterious science, the lawgiver was enabled to solve the difficulties which arose during his management of the Israelites, in spit of the pilgrimages, wars, and the frequent miseries of the nation. He covertly laid down the principles of this secret doctrine in the first four books of the Pentateuch but withheld them from Deuteronomy. This constitutes the former the man, and the latter the woman. Moses also initiated the seventy elders into the secrets of this doctrine, and they again transmitted them from hand to hand. Of all who formed the unbroken line of tradition, David and Solomon were first initiated into the Kabbalah. No one, however, dared to write it down till Simon ben Jochai, who lived at the time of the destruction of the second Temple. Having been condemned to death by Titus, Rabbi Simon managed to escape with his son, and concealed himself in a cavern where he remained for twelve years. Here in this subterranean abode, he occupied himself entirely with the contemplation of the sublime Kabbalah, and was constantly visited by the prophet Elias, who disclosed to him some of its secrets, which were still concealed from the theosophical Rabbi. Here, too, his disciples resorted to be initiated by their master into these divine mysteries; and here Simon be Jochai expired with this heavenly doctrine in his mouth, whilst discoursing on it to his disciples. Scarcely had his spirit departed, when a dazzling light filled the cavern, so that no one could look at the Rabbi; whilist a buring fire appeared outside, forming as it were a sentinel at the entrance of the cave, and denying admittance to the neighbors. It was not till the light outside, and the fire outside, had disappeared, the disciples perceived that the lamp of Israel was extinguished. As they were preparing for his obsequies, a voice was heard from the heaven, saying 'Come ye to the marriage of Simon b. Jochai; he is entering into peace, and shall rest in his chamber!' A flame preceded the coffin, which seemed enveloped by and burning like fire. And when the remains were deposited in the tomb, another voice was heard from heaven, saying 'This is he who caused the earth to quake and the kingdoms to shake!' His son, R. Eliezer, and his secretary, R. Abba, as well as his disciples, then collated R. Simon b. Jochai's treaties, and out of these composed the celebrated work called Sohar i.e., Splendor, which is the grand storehouse of Kabbalism."


Enoch the Man who walked with God (Neanderthaler)
Posted by Jerd Guillaume-Sam at 12:57 AM