Cyrus(ruse) the Great the Founder of the Persian Empire 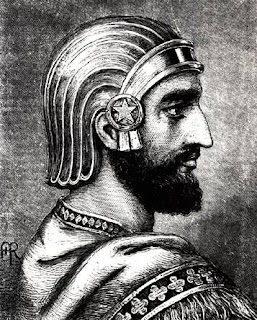 The founder of the Persian empire, is first known to us from the record, on the cuneiform clay tablet and cylinder, which recounts his reign, his conquest and capture of Astyages, king of Media, in 549 B.C. At this time Cyrus was called king of Elam. Year after year was idly spent by Nobonidas, king of Babylonia, at Terma, a suburb of the capital, Babylon, while his son - doubtless Belshazzar - was with his army at Akkad (Northern Babylon). In 538 Cyrus, favored by a revolt of the tribes on the Persian gulf, advanced on Babylon from the southeast, and after giving battle to the army of Akkad, took Sippona, and lastly Babylon, "without fighting." Cyrus at once began a friendly policy of religion. The nations who had been carried captive to Babylon, along with the Jews, were restored by their countries and allowed to take their gods with them. The empire of Croesus in Lydia had been taken two years before, and Cyrus was now master of all Asia from the Mediterranean to the Hindu-Kush. The conqueror's hold over Asia Minor and Syria was much strengthened by his friendly relations with the Phoenicians and the Jews, who received the news of his triumphs with joy. After the great king had widened his dominions from the Arabian desert and the Persian gulf on the south to the Black sea, Caucasus and the Caspian, he died in 529 B.C. Cyrus ranks high among Asiatic conquerors. He was a wise ruler, whose aim was to soften by kindness the harsh rule which his sword was constantly extending.

Persia. called by the natives Iran, the most extensive and powerful native kingdom of western Asia, is bounded on the north by the Caspian sea and Asiatic provinces of Russia; on the east by Afghanistan and Beluchistan; on the south by the Indian ocean, the Strait of Ormuz and the Persan Gulf; on the west by Asiatic Turkey. It extends about 900 miles from the east to west, and 700 miles from north to south, and has an area of 600,000 square miles. It consist for the most part of an elevated plateau, which in the center and on the east side is almost a dead level, but on the northwest and south is covered with mountain chains.

The climate is exceedingly varied. The younger Cyrus is reported to have said to Xenophon that "people perish with cold at one extremity of the country, while they are suffocated with heat at the other." Persia, in fact, may be said to possess three climates - that of the gulf coast, that of the elevated plateau, and that of the Caspian Provinces. Along the southern coast the heat of summer and autumn is very severe, while in winter and spring thew climate is delightful. On the plateau there is considerable difference of climate, , and considerable variation from heat to cold. About Ispahan the winters and summers are equally mild; but to the north and northwest of this the winters are very severe, and the desert region of the center and east of the country of its border endure most oppressive heat in summer and piercing cold in winter. The Caspian provinces in the north, on account of their general depression below the sea level, are exposed to a degree of heat in summer almost equal to that of the West Indies, and their winters are mild. Rains, however, are frequent, and many tracts of low country are very unhealthy. Except in the Caspian provinces, the atmosphere of Persia is remarkable for its dryness and beauty.

The cultivated portions of Persia, when supplied with moisture, either by rainfall or irrigation, are very fertile - in some places two crops can be raised in a year. The principle products are wheat(the best in the world), barley, corn, sugar and rice. The vine flourishes in several provinces, and the wines of Shiraz are celebrated in eastern poetry. Mulberries are largely cultivated, and silk is one of the most important productions of the country. The silk cultivation has greatly diminished of the late years, however, on account of the silkworm disease.

Among the domestic animals the horse, the ass and the camel hold the first place. The horses of Persia are larger and handsomer than those of Arabia, but less fleet. Salt is the principal mineral product, although copper, lead, antimony and some other minerals abound in certain localities. Considerable coal has been mined in the mountains near Teheran. The settled portion of the population are chiefly descendants of the ancient Persian race with an inter-mixture of foreign blood. They are all Mohammedans of the Shiite sect, except the few Parsees who still retain the ancient faith of Zoroaster. The nomads or pastoral tribes are for distinct races - Turks, Kurds, Lirurs and Arabs. Of these nomad races the Turkish is the most numerous, the present Kajar dynasty belonging to it. The nomad races are distinguished from courage, manliness and independence of character; but they are inveterate robbers, and have been the cause of many revolutions and civil wars. There is a small population of native Christians - the Nestorians of Urumiah and Telmais, and Armenians, whose principle settlement is at Ispahan. Including those who have joined the Roman Catholic and Protestant churches the whole number of Christians can hardly exceed 50,000. Christian missions are, however making steady progress in Persia. The population of Persia is variously estimated at from 5,000,000 to 10,000,000. The government is a pure despotism, the "shah," or "padishah," possessing absolute authority over the lives and property of his subjects. His deputies, the governors of provinces and districts, possess a like authority over those under them although they are accountable to the shah, and may be punished by him for any acts that he doesn't approve. The revenue is derived almost exclusively from tax on the land and its products, and as a natural result the peasantry are seriously oppressed by the provincial governors. It is believed that great as the legal taxes are, the illegal exactions amount to nearly an equal sum. For the history of ancient Persia see Rawlinson's The Seventh Great Oriental Monarchy