About 630 years B.C. the empire and city of Babylon were conquered by Nebuchadezzar, the king of the Chaldeans, a nomadic race, who, descending from their homes in the Caucasian mountains, had overwhelmed the countries of Southern Asia. Nebuchadnezar was engaged during his whole reign in wars of conquest. Among other nations who fell beneath his victorious arms was Judea, whose king, Jehoiakim, was slain by Nebuchadnezzar, and his son, Jehoiachin, ascended the Jewish throne. After a reign of three years, he was deposed by Nebuchadnezzar, and his kingdom given to his uncle, Zedekiah, a monarch distinguished for his vices. Having repeatedly rebelled against the Babylonian king, Nebuchadnezzar repaired to Jerusalem, and, after a siege of eighteen months, reduced it. The city was leveled with the ground, the Temple pillaged and burned, and the inhabitants carried captive to Babylon. These events are commemorated in the first section of the English and American Royal Arch system. 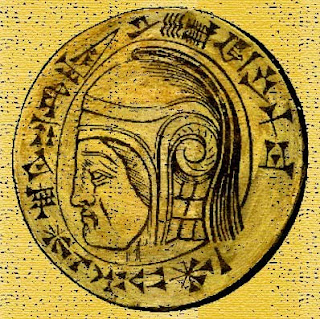 Nebuchadnezzar, the most illustrious of Babylonian kings, was the son of Nabopolassar, the general of the Babylonian garrison at the time the Assyrian empire fell to pieces after the death of Assur-bani-pal. The Babylonians then threw off the hated yoke of Assyria, and the Nabopolassar was proclaimed king of Babylonia, in 625 B.C. Nebuchadnezzar succeeded him in 604 B.C., reigning 43 years and was one of the greatest sovereigns who ever ruled over an ancient empire. He recovered the long lost provinces of the kingdom, rebuilt palaces and temples, as well as the city of Babylon , captured and destroyed Jerusalem, taking the Jews into captivity. It is an astonishing fact that not a single mound has been opened by explorers in Babylonia, which did not contain bricks, cylinders and tablets inscribed with his name. The accompanying cut is a facsimile of a coin bearing his image and superscription, the only genuine one in existence.


The Nebuchadnezzar is the hovercraft captained by Morpheus in the Matrix movies.

According the Matrix, the Nebuchadnezzar was built in 2069. It is a hovercraft designed for the sewers and tunnels under the ground. It can broadcast up to seven people at a time and can upload programs directly to them.
Posted by Jerd Guillaume-Sam at 2:05 AM