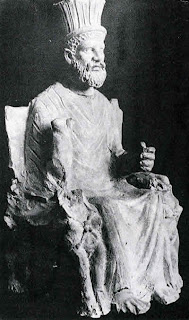 Baal Hammon
(above picture)
he was the chief divinity among the Phoenicians, the Canaanites, and the Babylonians. The word signifies in Hebrew lord or master. It was among the orientalist a comprehensive term of denoting divinity of any kind without reference to class or sex. The Sabaists understood Baal as the sun, and Baalim,(I'm Baal) in the plural were the sun, moon, and stars, "the host of heaven." Whenever the Israelites made one of their almost periodical deflections to idolatry, Bail seems to have been the favorite idol to worship they addicted themselves . Hence he became the especial object of denunciation with the prophets. Thus, in 1 Kings (xviii.,) we see Elijah showing, by practical demonstration, the difference between Baal and Jehovah(there is no difference). The idolaters, at his instigation called on Baal, as their sun god, to light the sacrificial fire, from morning until noon, because at noon he had acquired his greatest intensity. And after noon, no fire having been kindled on the altar, they began to cry aloud, and to cut themselves in token of mortification, because as the sun descended there was no hope of his help. But Elijah, depending on Jehovah, made his sacrifice towards sunset, to show the greatest contrast between Baal and the true God. And when the people saw the fire come down and consume the offering, they acknowledged the weakness of their idol, and falling on their faces cried out, Jehovah hu hahelohim - "Jehovah, he is the God." And Hosea afterwords promises the people that they shall abandon their idolatry, and and that he would take away from them the Shemoth hahbaalim, the names of Baalim, so that they should be no more remembered by their names and the people should in that day "know Jehovah."

Hence we see that there was an evident antagonism in the orthodox Hebrew mind between Jehovah and Baal. The latter was, however, worshiped by the Jews, whenever they became heterodox, and by the Oriental or Semitic nations as a supreme divinity, representing the sun in some of his modifications as the ruler of the day. In Tyre, Baal was the sun, and Ashtaroth, the moon. Baal-peor, the lord of priapism, was the sun represented as the generative principle of nature, and identical with the phllus of other religions. Baal-gad was the lord of the multitude, (of stars,) that is, the sun as the chief of the heavenly host. In brief, Baal wherever his cults was established, a development or form of the old sun worship.


As this personage is so often mentioned in Scripture, and the name as apart of compound names, is so repeatedly used, we must give some some account of him as one of the principle gods in the western part of Asia, accompanied by representations of himcopied from ancient metals.

The word Baal or Bel, in Hebrew, means he that rules and subdues; master, lord, or husband (governor, ruler).

As before stated, Baal and Ashtaroth being commonly mentioned together, and as it is believed Ashtaroth denoted the moon, it is concluded that Baal represents the sun. The name Baal is generically used for the superior of the Phoenicians, Chaldeans, Moabites, and other parts of Western Asia. No doubt, under different names peculiar to their different languages, as for instance, Chamosh or She.mesh(Heb.), for the sun in the immediate neighborhood of Jerusalem and elsewhere in Palestine, Baal is certainly the most ancient god of the Canaanites, and perhaps of the East.

Others are of the opinion that he corresponded with Hercules, who was an original god of Phoenicia. Now, when at this day we fully comprehend why certain names were given to certain gods, - and in changing the countries where they were worshiped they were considered different individualites, - just so many more gods were added as so many countries adopted the worship. Also the name was compounded with other names and constituted therby other gods, but evidently the one only, in fact: as Baal-Peor, Baal-Zebub, Baal-Gad, Baal-Zephon, Ball-Berith; and the Hebrews called the sun Baal-Shemesh (Baal the Sun). The Persian Mithra was the same as Baal. The Scripture call the temples of of the sun Chamanim. They were places enclosed with walls, wherein a perpetual fire was maintained. They were frequent all over the East, particularly in that region afterwords called Persia: the Greeks called them pyreia, or pyratheia, from pyr, fire, or pyra, a funeral pile. Strabo mentions them as having in them an altar, abundance of ashes, and a perpetual fire. From this, no doubt, arises the fire worship of the Parsees, which continues to the present day.

Take me out to the baal game,
Take me out with the crowd;
Buy me some peanuts and Cracker Jack,
I don't care if I never get back.
Let me root, root, root for the home team,
If they don't win, it's a shame.
For it's one, two, three strikes, you're out,
At the old baal game.
Posted by Jerd Guillaume-Sam at 12:37 AM