a class of shell animals. The turtles belong to the same family, turtles being sea animals, while the tortoise lives mostly on land, in marshy places, but sometimes in rivers and ponds. They are known by their external skeleton or shell, which grows in some species like the finger nails the new part pushing the old part before it, and in others like the rings of a tree. This shell is really an expansion of the backbone in the shape of a shield, and is covered with a dry skin or thin scales. The shells are marked and spotted, as is seen in the tortoise shell, which is used for ornamental work. The heads, legs and arms can be drawn inside this bony case, which is formed of several plates. The tortoise can swim, but not for great distances and are usually found in the mud in shallow water, stretching their long necks out occasionally for air, though many of them are land animals. They live on frogs, small birds, and fish. The snapping turtle, really a tortoise, is sometimes for feet long. The mud tortoise or turtle, the spotted tortoise, the painted tortoise, and the terrapin, so highly valued for food, are kinds found in the United States. The terrapin is a fresh water tortoise, of which there are several varieties, the Florida terrapin being the largest, and the chicken terrapin the finest. The turtles are all sea animals, and good swimmers, feeding on seaweed, though some kinds eat water animals. The flesh of those that live on animals is disagreeable, while that of the others is considered a great delicacy. They lay their eggs, about a 100 at a time on a sandy beach, covering them with sand. When on land they are easily caught and if turned on their backs cannot escape. They are often kept in pens, filled with water by the tide, and fed on purslane. The green turtle, found in the West Indies and Gulf of Mexico, is the variety most used for food. 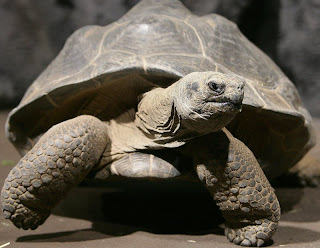 The logger head turtle, the hawks-bill, and the leathery turtle are species which are taken for the shell and for an oil which they furnish. The shell was much used by the Romans for ornamental purposes, and when whole was made into a cradle or bath tube, drinking troughs and even small boats.


Avatars of Vishnu. - First Matsaya - which is fabled to have assumed the form of a fish, to restore the lost Veda which had been stolen from Brahma in his sleep By the demon Hayagriva. This, and the second and third Avatars, seem to refer to the universal deluge; and the present would appear as the announcement of it to a pious king, Satyarata, who is considered by some to have been Noah. He appeared first in the shape of a minute fish to the devout monarch to try his piety and benevolence, then gradually expanding himself and finally announced the flood. "In in seven days from the present time the three worlds will be plunged in an ocean of death; but in the midst of the destroying waves, a large vessel sent by me for the use shall stand before thee. Then shall thou take all medicinal herbs and variety of seeds, and accompanied by seven saints, encircled by pairs of all brute animals, thou shall enter the spacious ark, and continue in it, secure from the flood, on an immense ocean, without light, except the radiance of thy holy companions. When the ship shall be agitated by an impetuous wind thou shal fasten it with a large sea serpent to my horn, for I will be near thee, drawing the vessel with thee and they attendants. I will remain on the ocean until the day of Brahma[a year] shall be completely ended." (Maurice).

When the deluge was abated and mankind destroyed, except Satyarata and his companions, Vishnu slew the demon Hayagriva and recovered the lost Veda, or in other words, when the wicked were destroyed by the deluge, sin no longer prevailed, and virtue was restored to the world.

Second. Vishnu assumed the form of an immense tortoise, to support the earth while the gods and genii churned with it the ocean. He is represented as a tortoise, sustaining a circular pillar which is crowned by the lotus throne, on which sits the semblance of Vishnu in all his attributes. A huge serpent encircles the pillar, one end is held by the gods and the other by the daityas or demons. By this churning the sea was converted into milk, and then into butter, from which, among other things, produced the Amrita or water of life drank by the Immortals.

An extraordinary belief prevailed among the Iroquois Indians, in which the tortoise is imagined to have acted an equally important part in the formation of the globe. They believed that before the period there were six male beings who existed in the regions of the air, but were nevertheless subjected to mortality. Among them there was no female to perpetuate their race , but they learned that there was one in heaven, and it was agreed that one of them should undertake the dangerous task of endeavoring to bring her away. The difficulty was how he should get there; for although he floated on aether, it appears he could not soar to the celestial realms. A bird therefore (but whether the eagle of Jove, or the Garuda of Vishnu, or what other kind we are not told), became his vehicle, and conveyed him thither on his back. He saw the female and seduced her by (what too many ladies at the present day are led astray by), flattery and presents, but of what kind we are also unfortunately left in ignorance. The Supreme Deity knowing what had taken place immediately turned her, like another Eve, out of Paradise, and she was received by a tortoise on its back, when the otter(a most important party in North American legends), and the fishes disturbed the mud at the bottom of the ocean, and drawing it up around the tortoise, formed a small island, which gradually increasing became the earth. The female had at first, two sons (one of whom slew the other), and afterwords, several children from whom sprung the rest of mankind.
Posted by Jerd Guillaume-Sam at 10:53 PM