The Druids were a sacred order of priests who existed in Britain and Gaul, but whose mystical rites were practiced in most perfection in the former country, where the Isle of Anglesea was considered as their principle seat. Higgins thinks that they were also found in Germany, but against their opinion we have the positive statement of Caeser.
The meanings given to the word have been very numerous, and most of them wholly untenable. The Romans seeing that they worshiped in groves of oak, because the tree was peculiarly sacred among them, derived their name from the Greek word, drus; thus absurdly seeking the etymology of a word of am older language in one comparatively modern. Their derivation would have been more reasonable had they known that in Sanskrit duma is an oak, from dru, wood. It has also been traced to the Hebrew with equal incorrectness, for the Druids were not of the Semitic race. Its derivation is rather to be sought in the Celtic language. The Gaelic word Druiah signifies a holy or wise man; in a bad sense, a magician; and this we may readily trace to the Aryan druh, applied to the spirit of night or darkness, whence we have the Zend dru, a magician. Drudism was a mystical profession, and in the olden time mystery and magic were always confounded. Vallencey (Coll. Beb. Hib., iii. 503,) says: Welsh, Drud, a Druid, i.e. the ab-solver or remitter of sins; so the Irish Drui, a Druid, most certainly from the Persian duru, a good and holy man;" and Ousely (coll. Orient., iv. 302,) adds to this the Arabic dari, which means a wise man. Bosworth (A.S. Dict.) gives dry, pronounced dru, as the Anglo Saxon for "a magician sorcerer, druid." I think that with the old Celts the Druids occupied the same place as the Magi did with the old Persians.

Druidism was divided into three orders or degrees, which were, beginning with the lowest, the Bards, the Prophets, and the Druids. Higgins thinks that the prophets were the lowest order, but he admits that it is not generally allowed. The constitution of the Order was in many respects like that of the Freemasons. In every country there was an Arch-Druid in whom all authority was placed. In Britain it is said that there was under him three arch-flamens or priests, and twenty-five flamens. There was an annual assembly for the administration of justice and the making of laws, and, besides, four quarterly meetings, which took place on the days when the sun reached his equinoctial and solstitial points. The latter would very nearly correspond at this time with the festivals of St. John the Evangelist. It was not lawful to commit their ceremonies or doctrines to writing, and Caeser says (Bell. Gall., vi. 13,) that they used the Greek letters, which was, of course, as a cipher; but Higgins (p.90) says that one of the Irish Ogum alphabets, which Toland calls secret writing, "was the original, sacred, and secret character of the Druids." 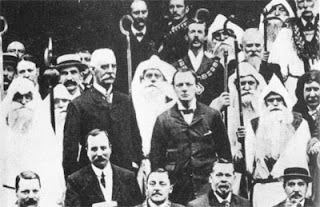 Winston Churchill In the center
The places of worship, which were also places of initiation, were of various forms: circular, because a circle was an emblem of the universe; or oval, in allusion to the mundane egg(i.e. Orphic Egg/mohodiscontiuity) , from which, according to the Egyptians, our first parents issued; or serpentine, because, because a serpent was a symbol of Hu, (Hu-Man)the druidical Noah; or winged, to represent the motion of the Divine Spirit; or cruciform, because a cross was the emblem of regeneration. Their only covering was the clouded canopy, because they deemed it absurd to confine the Omnipotent beneath a roof; and they were constructed of embankments of earth, and of unhewn stones, unpolluted with a metal tool. Nor was any one permitted to enter their sacred retreats, unless he bore a chain.

The ceremony of initiation into the Druidical Mysteries required much preliminary mental preparation and physical purification. The aspirant was clothed with three sacred colors, white, blue, and green; white(sacrifice) as the symbol of Light, blue(bluebloods) of Truth, and green(future) of Hope. When the rites of initiation were passed, the tri-colored robe was changed for one of green; in the second degree, the candidate was clothed in blue; and having surmounted all the dangers of the third, and arrived at the summit of perfection, he received the red tiara and flowing mantle of purest white. The ceremonies were numerous , the physical proofs painful, and the mental trials appalling.. They commenced in the first degree, with placing the aspirant in the pastos, bed or coffin, where his symbolized death was represented, and they terminated in the third, by his regeneration or restoration to life from the womb of the giantess Ceridwin, and the committal of the body of the newly born to the waves of in a small boat, symbolical of the ark. The result was, generally that he suceeded in reaching the safe landing place, but if his arm was weak, or his heart failed, death was the almost inevitable consequence. If he refused the trial through timidity, he was contemptuously rejected, and declared forever ineligible to participate in the sacred rites. But if he undertook it and succeeded, he was joyously invested with all the privileges of Druidism.

The doctrines of the Druids were the same as those entertained by Pythagoras. They taught the existence of one Supreme Being; a future state of rewards and punishments; the immortality of the soul, and a metempsychosis; and the object of their mystic rites was to communicate those doctrines in symbolic language, an object and a method common alike to Druidism, to the Ancient Mysteries and Modern Freemasonry.


Related Article on the Druids

Oak. A large class of trees and shrubs. There are about three hundred species, found mostly in temperate regions, and more numerous in America than Europe. Some species are evergreen, as the live oak of the southern states, and the evergreen oak of California. The different kinds vary very much, some having the leaves very deeply indented, others with straight edged leaves; some produce their fruit every year; and other only every other year; while some have the fruit growing on stems, and in others it grows directly on the tree. They are all known, however, by their fruit, the acorn, a nut set in a cup. Among the most common kinds are the white oak, black oak, scarlet oak, red oak, willow oak, black scrub oak, live oak, etc. European varieties include also the Barbury oak, evergreen oak, Italian oak, cork oak, dwarf chestnut oak, the gall oak, and the manna oak. The species most common in Great Britain is one like our whit oak, with smaller leaves. The oak furbishes a large part of our best timber, ranking next to the white pine in the variety of its uses. The wood of many varieties is very tough and durable, and is used in shipbuilding, carriage making, for barrels and agricultural implements, and as splints it is used for baskets and chair seats. The bark yields tannin in large quantities, and is used in medicine and in tanneries. The acorns are used for feeding hogs, and in Tukey are ground and made into a sweetmeat. The oak is a very long lived tree, especially the British oak, some of which are probably 1,00 years old. The "King Oak" in Windsor Forest is said to have shaded William the Conqueror. The tree is of a slow growth, and plantations of it are not of maketable value for some time. 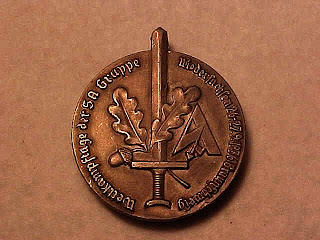 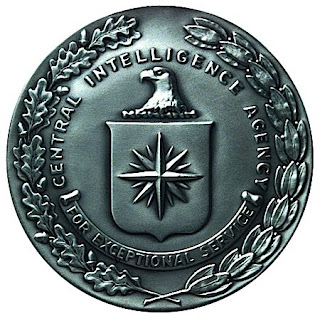 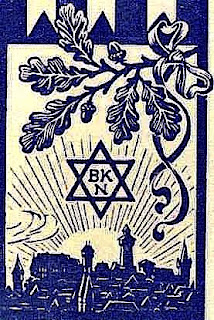 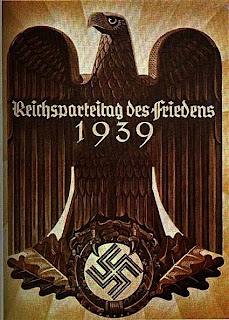 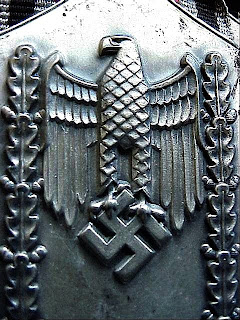 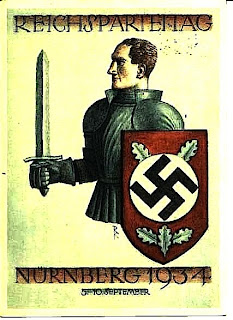 Posted by Jerd Guillaume-Sam at 7:50 PM