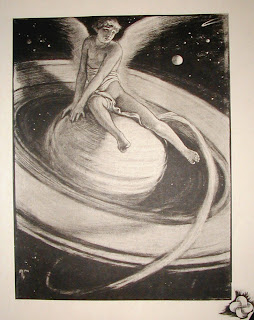 An early Italian god who presided over farming, his name coming from the word meaning "to sow." He most resembles Demeter of the Greek dieties, but was later identified or confounded with the Greek Kronos. According to the Greek myth Kronos the son of Uranos (heaven) and Gaea (earth) is the youngest of the Titans. He married Rhea by whom he had several children, all of whom he devoured at their birth except the last, Zeus (Jupiter), whom his mother saved by a stratagem. The motive of Kronos was his hope of bringing to naught a prophecy which declared that his children would one day deprive him of his sovereignty, as he himself had done in the case of his father Uranos; but fate is stronger even than the gods, and when Zeus had grown he began ten years' war against Kronos and the Titans, ending in their being hurled down to Tartarus and there imprisoned. Other myths added to this that after his banishment from heaven Kronos went to Italy, where Janus gave him a share in his sovereignty. In this way Zeus' conquest of Kronos, a Greek myth, became the Roman myth of Jupiter's conquest of Saturn. Saturn thus became a divine king, who ruled with a fatherly mildness the Italian natives and taught them agriculture. Hence the whole land received from him the name of Saturnia, or "land of plenty," and his reign was that "golden age" of which later poets sang. Saturn's temple, in Rome, stood at the foot of the Capitoline Hill. 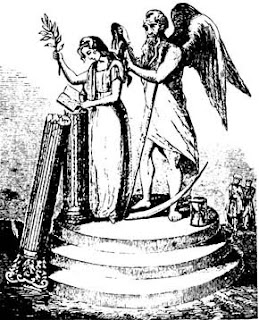 The planet Saturn was worshiped under the names of Moloch, Malcom, or Milcom by the Ammonites, the Canaanites, the Phoenicians, and the Carthaginians, and under that of Chiun by the Israelites in the deserts. Saturn was worshiped among the Egyptians under the name of Raiphan, or, as it is called in the Septuagint, Remphan. St. Paul, quoting the passage of Amos, says, "ye took up the tabernacle of Moloch and the star of your god Remphan." In the classic mythology the scythe was one of the attributes of Saturn, the god of time, because the deity is said to have taught men the use of the implement in agriculture. But Saturn was also the god of time; and in modern iconography Time is allegorized under the figure of an old man, with white hair and beard, two large wings at his back, an hourglass in one hand and a scythe in the other(retrieving a hair sample i.e. dna from the woman). He is represented as attempting to disentangle the ringlets of a weeping virgin who stands before him. It is in its cutting and destructive quality that the scythe is here referred to. Time is thus the great mower who reaps his harvest of men. Masonry has adopted this symbolism, and in the third degree the scythe is described as an emblem of time, which cuts the brittle thread of life and makes havoc among the human race.
Posted by Jerd Guillaume-Sam at 3:08 AM