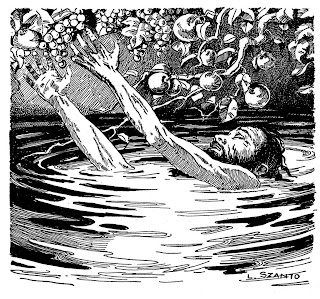 Noted in Greek myth for the punishment he received in the lower world. He was the son of Zeus, and for making known the counsels of his divine father, or for other reasons - the stories differ - he was in the lower world stricken with a fearful thirst, and had to stand up to the chin in a lake, the waters of which escaped him whenever he tried to drink. Clusters of fruit hung over his head, but missed his grasp whenever he reached for them; at the same time he was in terror lest a huge rock, hung over his head, and ever threatening to fall, should crush him. From Tantalus comes our word "tantalize."

"Everlasting Unending Temptation"
He kept reaching for something out of his reach, I know the feeling.
Posted by Jerd Guillaume-Sam at 1:30 AM