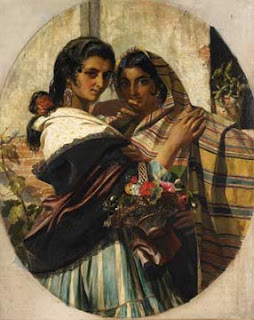 Gypsies are a wandering race of people found all over the world, peculiar alike in their looks, language and manner of living. How they got the name "gypsy," or where they originally came from, is not known. That they are from the east is generally admitted, but as to the probable antiquity of the Romani, as they call themselves, the ablest scholars are divided . As a race they are good looking, with a tawny, olive skin; a dark, lustrous eye; very white teeth; black or dark brown hair, rather coarse and frizzled; a graceful from, with remarkable finely made hands and feet. These peculiarities in their person are as marked as are those of the Jewish people. In character, also, they seem to stand apart, or alone. The better kind are quick witted, courteous and trustworthy - when trusted; lavishly generous with one hand, while they grasp a bargain with other. Having no ambition and leading a kind of cuckoo like life, their aims seems to make the best of this life, as they find it, thinking little and caring less for the future. Their piety, when they assume any, is largely cant, and the faults of these "spoilt children of nature" are very similar to those of our native American Indian - boastful, crafty, superstitious, thriftless and indolent - with a passionate streak added. They break most of the ten commandments - but lightly - great crimes being rare among them. Their specialties of horse-dealing and fortune telling favor easy ideas of right and wrong , and their views on what is mine or thine are decidedly loose. They excel as tinkers and blacksmiths. Their language is a bond of universal brotherhood - for gypsies everywhere speak in the same Romani, or "gypsy tongue." In the Romani vocabulary - of some 5,00 words - the Indian or Hindustani elements prevails, though there is a large portion of borrowed words - Persian, Armenian, Slavonic, Roumanian, Magyar, etc. These words make a kind of record of the route by which the English gypsies arrived in England, and as there are fifty Greek words and thirty Slavonic words, which together outnumber all the other borrowed words put together, it would seem to follow that they carried longest in Greek and Slavonic speaking countries. In Turkey, as also in England, Finland and Italy, the gypsy calls himself "rom" (man or husband), from which comes "romni" (female gypsy woman, or wife) and the adjective "romano" (gypsy). This may account for the supposed Egyptian origin of the race - the ancient Egyptian "rome" being man. They were traced late in 1417 from the east through Germany, Switzerland, Italy and France; while in 1447 they reached Spain; Polan and Russia about 1501, Sweden in 1512 and England in 1514. They have been protected by kings and popes, and nobles; Emperor Sigismund, Pope Martin V., Earl of Surrey James IV., and the Arch-duke Joseph of Austria being among the number of their friends. They have also been persecuted in many countries, charged with kidnapping children and acting as spies. They number in Europe about 700,000. Asia has thousands of them, and they are constantly emigrating to the United States ad Australia.
Encyclopedia

PRE ICE AGE (24,000 to 8000 BC)
Cro-Magnon : The earliest form of TAN 'genetically modified' modern humans. The Cro-Magnons were developed about 35,000 years ago by the Neanderthals, and physically resembled modern Europeans. Cro-Magnon people painted the walls of their caves, producing the first known human art. See LionMan (28000 BC)

Romany : Of or relating to the Gypsies or their language or culture. [Romany romani, feminine of romano, gypsy, from rom, man, from Prakrit íoma, man of a low caste, slave, of Dravidian origin.]
Prophets don't exist; business planners do.
Posted by Jerd Guillaume-Sam at 11:17 PM