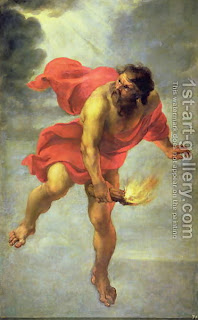 Here's a thought in this world if you give the people the truth you will get punished for it, either by your superiors or the ones your trying to help. Its funny when you think about, though God and the Devil are the same that's another reason they use the term Y he's a two in one playing both sides causing confusion and chaos to bring just to bring in his order. Y is also the source of a everything the double helix hence the term "WHY?" at the beginning of almost every question, that's the beginning of understanding the world around you and also yourself.


Prometheus stole fire and gave it to the human race. For this, he was bound to a mountain and punished for centuries. Prometheus was one of the Titans, the original race of gods sprung from earth and sky(evolution). He sided with Zeus and the other major gods of classical Greece when they overthrew the other Titans. "Prometheus" probably means (intellect) "forethought", as his brother Epimetheus's name means "afterthought"


Now in the story of Satan(adversary), as with Prometheus, Satan once was illustrious. He was a glorious angel, said to be the most beloved of God. The All Seeing Father. And just like with Prometheus dispute came on account of the mortals, though in this case the roles would be changed slightly. While Prometheus had pity and compassion for the mortals, and Zeus looked down to them, in the case of Lucifer, God seemed to cherish the mortals above the angels and gave them free will which was denied the angels, Lucifer grew jealous of God’s affections for these mortal men and rebelled against God as he thought Gods treatment of the angels was unfair, and this can be paralleled to the way Prometheus viewed Zeus’s treatment of the Titans.

Satan - To be adverse, the grand adversary of man; the devil. Sa=ASS= mess.age of Tan=color of the new slave i.e Pakistan Afghanistan Uzbekistan Stan-Natsi-Anti-Saint

Devil- 1. the evil one, Satan. 2. An evil spirit. 3. A machine for tearing or cutting raw materials as cotton, wool, etc. 4. A wicked person. 5. An errand boy or youngest apprentice in a printing office. The liver is the key to red blood. The name Lucifer is a name for hot, dysfunctional, blood. To have a liver is to live. "Live" spelt backwards is Evil and the word Lived becomes Devil. Red (Roth) is the colour for war. Yellow (Gold) is a vitalizer, while Blue is the colour given to controllers. Green (Yellow with Blue) is the colour given to Masonic initiates (Greenland). White means armour, while Black stands for Black Magic.

Lucifer - Light bringing, the morning star. 1. The planet Venus, when morning star. 2. Satan. 3. A match tipped with a combustible substance, and ignited by friction.

Cunning. Used by old English writers in the sense of skillful. Thus, in 1 Kings viii. 14, it is said of the architect who was sent by the king of Tyre to assist King Solomon in the construction of his Temple, that he was "cunning to work in all works in brass."

Curious. Latin, curiosus, from cura, care. An archaic expression for careful. Thus in Masonic language, which abounds in archaisms, an evidence, indeed, of its antiquity, Hiram Abiff is described as a "curious and cunning workman," that is to say, "careful and skillful."

Seven Veils in our language

2: Meaning of the wo rds and spelling (to cast a spell)

6: Hieroglyphics of each character (as in a play)

7: Alpha-numeric conversion (Kabalarian)
Grasp the premise and it all makes sense!

Posted by Jerd Guillaume-Sam at 9:42 PM