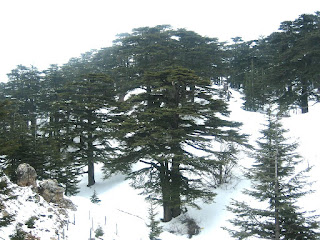 Cedar is a name given to several evergreen cone-bearing trees. The farfamed cedar of Lebanon is a tree which, on account of its beauty, stateliness and strength, has been a favorite with poets and painters. It is often used in the Bible to denotes power, prosperity and long life. It is found 6,000 feet above the sea level, and grows from 50 to 80 feet tall and often is larger in girth. It is very long lived and still grows on Mt. Lebanon, where there are elven groups of them. The deodar or "god tree" of the Himalayas, is a cedar growing sometimes 60 to 70 feet high before branching.

It is found on mountain peaks 5,500 to 12,000 feet high. The Hindus hold the deodar in great veneration. American white cedar is found in swamps in the United States, south of Ohio, and Massachusetts. It grows 30 to 70 feet high. Its timber will remain a long time under water without rotting, and so is used much for fences and shingles and city pavements. Red cedar is a native of North America and the West Indies.

Its bright red wood is hard and lasting. It also has a pleasant smell which moths do not like, and so clothes chest and closets are made of it. Red cedar is also used for lead pencils and in cabinet work. The trees are usually not more than 30 feet high, but the California red cedar is of immense size. Cigar boxes are made of Spanish cedar, which is really a kind of mahogany. In scriptural symbology, the cedar-tree was the symbol of eternity, because its substance never decays nor rots.

Hence, the Ark of the Covenant was made of cedar; and those are said to utter things worthy of cedar who write that which no time ought to obliterate. The grove of trees known as the Cedars of Lebanon consists of about four hundred trees, standing quite alone in a depression of the mountain with no trees near, about six thousand four hundred feet above the sea, and three thousand below the summit. About eleven or twelve are very large and old, twenty five large, fifty of middle size, and more than three hundred younger and smaller ones. The older trees have each several trunks and spread themselves widely round, but most of the others are of cone-like form, and do not send out wide, lateral branches. In 1550 there were twenty-eight old trees; in 1739, Pococke counted fifteen, but the number of trunks makes the operation of counting uncertain. They are regarded with much reverence by the native inhabitants as living records of Solomon's power, and the Maronite Patriarch was formerly accustomed to celebrate there the festival of the Transfiguration at an altar of rough stones.
Posted by Jerd Guillaume-Sam at 10:15 AM