"China" in English is derived from Cin, a Persian name for China popularized in Europe by Marco Polo 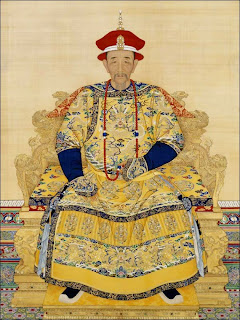 The Chinese has long been an object of curiosity to the western world, from its extent of empire and the singularity of its social institutions. The Chinese empire occupies an extent of surface equal to that of all Europe, containing within it every variety of soil and climate, and natural production; thus rendering it in institutions it has presented through all periods a model of the primitive form of government, the patriarchal, and an exemplification of the evil of continuing it beyond its just and necessary period. In China all is at a stand still; succeeding ages add not to the knowledge of those that have gone before; no one must presume to be wiser than his fathers: around the Son of Heaven, as they designate their emperor, assemble the learned of the land as his council; so in the provinces the learned in their several degrees around the governor; and laws and rules are passed from the highest down to the lowest, to be by them given to the people. Every, even the most minute, circumstance of common life is regulated by law. It matters not, for example, what may be the wealth of the individual, he must wear the dress and build his house after the mode prescribed by ancient regulations. In China everything bears the stamp of antiquity: immovableness seems to be characteristic of the nation; every implement retains its primitive rude form; every invention has stopped at the first step. The gradual progress towards perfection of the Caucasian race is unknown in China; the plow is still drawn by men; the written characters of their mono-syllabic languages stand for ideas, not for simple sounds; and the laborious task of learning to read occupies the time that might be employed in the acquisition of valuable knowledge. Literature has been at all periods cultivated by a nation where learning (such as it is) is the only road to honor and dignity, and books beginning with the five Kings of Con-fu-tsee, which equal the four Vedas of India in the honor in which they are held , have at all times been common in this empire. A marked feature in the Chinese character is the absence of imagination: all is the product of cold reason. The Kings speak not of God, and present no system of religion: every thing of that nature in China came from India.
The uncertain history of China ascends to about 2,500 years before the Christian era; the uncertain history commences about eight centuries before Christ. According to Chinese tradition, the founders of the state, a hundred families in number, descended from the mountains of Kulcum, on the lake of Khukhunor, north-west of China; and hence the middle provinces of Chensee, Leong, Hona, &c. were the first seats of their cultivation. These provinces are in the same climate as Greece and Italy. Twenty-two dynasties of princes are enumerated as having governed China to the present day, the actual emperor being the fifth monarch of the twenty-second or Tai Tsin dynasty. Of these dynasties, one of the most remarkable is the Song, which ruled over the southern empire at the time China was divided into two, and fell beneath the arms of the Yver or mingled nomadic tribes, led to conquest by the descendants of Chingis Khan. This line, which reigned from A.D. 960 to 1280, distinguished itself by the encouragement of the arts and sciences; it cultivated relations with Japan, fostered trade and commerce, and in all things went contrary to the established maxims of Chinese policy, and while it lasted the empire bloomed beneath its sway; but the hordes of the desert leveled its glories, and its fate has been ever since held up as an awful warning to those who venture to depart even a hair's breadth from the ancient manners. At an earlier period, under the dynasty of Tsin (248-206 B.C.), China first received religion from India; but the missionaries were not artful or prudent enough to adapt it to Chinese maxims of state, and they were unsuccessful in the contest between them and the learned. At a later period, when the Buddhism of India had become the Lamaism of Tibet, it entered China as the religion of Foe, and by the worldly prudence of its bonzes or priests, succeeded in gaining a favorable reception and becoming the religion of the state. Everything that hopes for success in this country must fall in with the national character. China has often been overcome, and its reigning dynasty changed; but the manners and institutions of China remain unaltered, as different from those of the Caucasian race as the features of the Chinese face are from those of the European.
Posted by Jerd Guillaume-Sam at 10:47 PM