From the Core to the Mohodiscontinuity

Heaven, literally signifies the expanse of the firmament, surrounding our earth, and extended every way to an immense distance. The Hebrews acknowledged three heavens: the first the aerial heaven, in which the birds fly, the winds blow, and the showers are formed; the second, the firmament in which the stars are placed; the third, the heaven of heavens, the residence of the Almighty, the abode of saints(natsi) and angels(masons).
Heaven is considered by Christian divines and philosophers, as a place in some remote part of infinite space, in which the omnipresent Deity is said to afford a nearer and more immediate view of himself, and a more manifestation of his glory, than in the other parts of the universe. This is often called the empyrean, from that splendor with which it is supposed to be invested.; and of this place inspired writers to give us magnificent descriptions. The pagans considered heaven as the residence only of the celestial gods, into which no mortals were admitted after death, unless they were deified, As for the souls of good men, they were consigned to the Elysian fields.

Hell, the place of divine punishment after death. As all religions have supposed a future state of existence after this life; so all have their hell or place of torment, in which the wicked are supposed to have punished. The hell of the ancient heathens was divided into two mansions; the one called Elysium, on the right hand, pleasant and delightful, appointed for the souls of good men; the other called Tartara, on the left, a region of misery and torment, appointed for the wicked. The latter only was hell in the present restrained sense of the word.

The philosophers were of opinion, that the infernal regions were at a equal distance from all the parts of the earth; nevertheless it was the opinion of some that there were certain passages which led there, as the river Lethe near Syrtes, and the Acherusian cave in Epirus. At Hermione it was thought, that there was a very short way to hell; for which reason the people of that country never put the fair into the mouths of the dead to pay their passage.

The Jews placed hell in the center of the earth, and believed it ti be situated under waters and mountains . According to them there three passages leading to it: the first is in the wilderness, and by the Korah, Dathan and Abiram descended into hell; the second is in the sea, because Jonah, who was thrown into the sea, cried to God out of the belly of hell; the third is in Jerusalem, because it is said the fire of the Lord is in Zion, and his furnace is in Jerusalem. They likewise acknowledged seven degrees of pain in hell, because they find this place called by seven different names in scripture. Though they believed that infidels, and persons eminently wicked, will continue forever in hell; yet they maintained, that every Jew who is not infected with some heresy, and has not acted contrary to the points mentioned by the rabbins, will not be punished therein for any other crimes above a year at most. 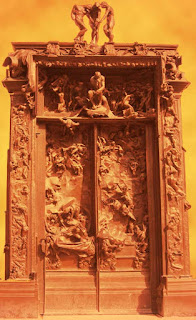 The Mahometans believe the eternity of rewards and punishments in another life. In the Koran it is said, that hell has seven gates, the first for the Mussulmans, the second for the Christians, the third for the Jews, the fourth for the Sabians, the fifth for the Magians, the sixth for the pagans, the seventh for all the hypocrites of all religions.

Among Christians, there are two controverted questions in regard to hell; the one concerns locality. the other the duration of its torments. The locality of hell, and the reality of its fire began first to be controverted bu Origen. That father, interpreting the scripture account metaphorically, makes hell to consist not in external punishments, but in a consciousness or sense of guilt, and a remembrance of past pleasures. Among the moderns, Mr. Whiston advanced a new hypothesis. According to him, the comets are so many hells appointed in their orbits alternately to carry the damned into the confines of the sun, there to be scorched by its violent heat, and then to return with them beyond the orb of Saturn, there to starve them in these cold and dismal regions. Another modern author, not satisfied with any hypothesis hitherto advanced, assigns the sun to be the local hell. As to the second question, viz. the duration of hell torments, we have Origen again at the head of those who deny that they are eternal; it being that father's opinion, that only men, but devils, after a due course of punishment suitable to their respective crimes, shall be pardoned and restored to heaven. The chief principle upon which Origen built his opinion, was the nature of punishment, which he took to be emendatory, applied only as physic for the recovery of the patient's health. Those who maintain this affirmative, ground their opinion upon scripture accounts, which represents the pains of hell under the figure of a worm which never dies, and a fire which is not quenched; as also upon the words, "These shall go away into everlasting punishment, but the righteous into eternal life."

Posted by Jerd Guillaume-Sam at 3:59 AM