Never believe, it's not so It's Magic!

Magi or magicians were an ancient religious sect in Persia and other eastern countries, who maintained that there were two principles, the one the cause of all good, the other the cause of all evil, simplifying reality; and abominating the adoration of images, worshiped God only by fire, which they looked upon as the brightest and most glorious symbol of Oromasdes, or the good god; as darkness is the truest symbol of Arimanius, or the evil god. This religion was reformed by Zoroaster, who maintained that there was one supreme independent being(Hal); and under him two principles or angels, one the angel of goodness and light, and the other of evil and darkness; that there is a perpetual struggle between them, which shall last to the end of the world; that then the angel of darkness and his disciples shall go into a world of their own, where they shall be punished in everlasting darkness; and the angel of light and his disciples shall also go into a world of their own, where they shall be rewarded in everlasting light. 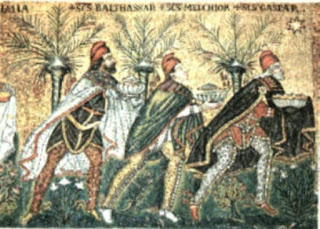 The priests of the Magi were the most skillful mathematicians and philosophers of the ages in which they lived, insomuch that a learned man and a magician became equivalent terms. The vulgar looked on their knowledge as more than natural , and imagined them inspired by some supernatural power; and hence those who practiced wicked and mischievous arts, taking upon themselves the name of magicians, drew on it that ill signification which the word magician now bears among us.

The sect still subsides in Persia, under the denomination of gaurs, where they watch the sacred fire with the greatest care, and never suffer it to be extinguished. Magic originally signified only the knowledge of the more sublime parts of philosophy; but as the magi likewise professed astrology, divination and sorcery, the term magi became odious, being used to signify an unlawful diabolical kind of science, acquired by the assistance of the devil and departed souls.

Posted by Jerd Guillaume-Sam at 11:14 PM