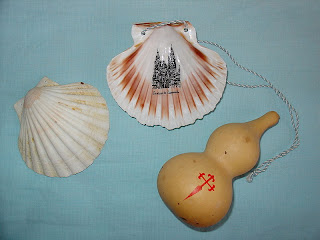 The cockle shell or the scallop-shell was worn by pilgrims in their hats as a token of their profession. The scallop-shell, the staff, and sandals form a part of the costume of a Masonic Knight Templar in his costume as a Pilgrim Penitent. Shakespeare makes Ophelia sing -

"And how shall I my true love know
From any other one?
O, by his scallop-shell and staff,
And by his sandal shoon!"
The scallop-shell was in the Middle Ages the recognized badge of a pilgrim. One Masonic authority states that "It is not easy to account for the origin of the shells a badge worn by the pilgrim, but it decidedly refers to much earlier Oriental customs than the journeys of Christians to the Holy Land, and its history will probably be found in the mythology of eastern nations." The shell was an ancient symbol of of the Syrian goddess Astarte, Venus Pelagia, or Venus rising from the sea. Strictly the the scallop-shell was the badge of pilgrims visiting the shrine of St. James of Compostella, and hence it is called by naturalists the pecten Jacooeus - the comb shell of St. James. All pilgrims that visit St. James of Compostella in Spain returned thence obsiti conchis, 'all beshelled about' in fact, in mediaeval times distinguished by the peculiar badge which they wore, as designating the shrine which they had visited. Thus pilgrims from Rome wore the keys, those from St. James the scallop-shell, and those from the Holy Land palm branches, whence such a pilgrims was sometimes called a palmer. But this distinction was not always rigidly adhered to, and pilgrims from Palestine frequently wore the shell. At first the shell was sewn of the cloak, but afterwards transferred to the hat; and while, in the beginning, the badge was not assumed until the pilgrimage was accomplished, eventually pilgrims began to wear it as soon as they had taken their vow of pilgrimage, and before they had commenced their journey. While on their pilgrimage from Paris, on the road to Santiago de Compostella in Basque country, Freemasonry's pilgrims symbolically carry an eight foot rod on which dangles a cockle shell and a gourd. These are all symbols of Neptune's neanderthal Frankish WATCHERS (Ocean's 11) rising from the ocean on a shell-like chariot, to deliver the Holy Graal into the world (Shell Oil, the colloidal craft of the 'grafting' Lord of the Feminine Principle).
Posted by Jerd Guillaume-Sam at 12:55 PM