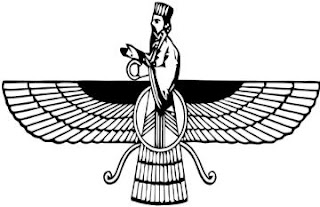 ZEND, or Zendavesta is a book containing the religion of the Magians, or the worshipers of fire, who were disciples of the famous Zoroaster. Avesta means the sacred text, and Zend the commentary. This book was composed by Zoroaster during his retirement in a cave, and contained all the pretended revelations of that imposter. The first part contains the liturgy of the magi, which is used among them in all their oratories and fire temples to this day; they reverence it as the Christians do the Bible, and the Muslims the Koran. The Parsee say in the catechism, or compendium of doctrines in use among them: "We consider these books as heavenly books, because God sent the tidings of these books to us through the holy prophet(profit) Zurthost." The greater part of the work was lost during the persecutions by the Muslims conquerors of Persia. One only of the books has been preserved, the Vendidad, comprising twenty-two chapters. The Yasna and Vispered together constitute the collection of fragments which are termed Vendidad Sade. There is another fragmentary collection called Yesht Sade. There are found many things in the zend taken out of the scriptures of the Old Test.amen.t, which Dr. Prideaux thinks is an argument that Zoroaster was originally a Jew. Great part of the Psalms of David are inserted; he makes Adam and Eve to have been the first parents of mankind, and gives the same history of the creation and deluge, as Moses does, and commands the same observances about clean and unclean beasts. The same law of paying tithes to the sacerdotal order, with many other institutions of Jewish extraction. The rest of its contents are an historical account of the life, actions, and prophecies of its author, with rules and exhortations to moral living. The Musilms have a sect which they call Zendikites, who are said to be Sadducees of Muslims, denying providence and resurrection, believing the transmigration of souls, and following the zend of the magi.
Posted by Jerd Guillaume-Sam at 4:49 AM