From Speaker for Animals 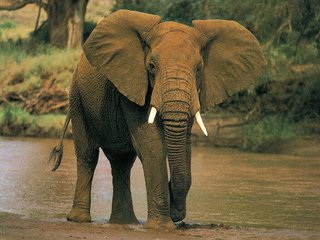 Ancient Power, Strength and Royalty,
Strength of the Feminine: The Child, the Woman,
and the Wise Woman (Matriarchal Head of Family).
The Importance of Family, Fertility, Sexual Power,
Discrimination, Clouds and Illusion,
Out of Control Masculine Rage

The symbolism of Elephant is ancient. In India, Elephant was the mount of Kings. Elephant was a devastating weapon of war and would throw the enemies of the Kings of India into confusion whenever the giant animals would rush into their ranks. In the West during the Roman Empire, the general Hannibul was made famous for attempting to bring the Carthagenian war elephants over the Alps to attack Rome from the city’s exposed flanks. He failed, of course. But in India and even in the West, Elephant came to symbolize the God of Warriors. Elephant is the totem of the greatest of warriors, denoting royalty, inner strength and nobility.

The myths involving Elephant have profoundly influenced humanity through history. Dreams filled with Elephant carry messages of transformation and spiritual power. Elephant in one’s dreams can signify the emergence of one’s Highest True Self. The Self, deep within the Collective Unconscious, only emerges when one has done one’s shadow work and integrated the contents of the Unconscious with Conscious Mind. This cannot be done by oneself, but is a sign of the Grace of the Divine and gift of Love of the As Above.

Elephants live in separate social groups of females and male. Members of the female herds care and protect their young, act together for mutual protection from predators, and maintain loving relationships across the generations. The older, experienced females act as the Grandmothers of the Herd, using their experience and wisdom to assist the mothers and calves with the problems of life. Unlike much of human society, elephant herds demonstrate how close supportive relationships can be maintain between the generations by the feminine members of family.

Elephants depend heavily on their well-developed sense of smell to stay informed on their environments. The sense of smell symbolizes the ability to ‘discriminate’ between positive and negative environments. Elephant can bring the gift of discrimination, so that if you are contemplating some important decision, you will notice if “something does not smell right” about your options, and you will take more time to find more positive solutions.

Male elephants wander with other males during much of each year, seeking food. But during breeding season, they become aggressive and go individually in search of the female herds. Once the breeding seasons are ended, they leave the females and return to their bachelor herds. In rut, the males are dangerous and so the term “rogue elephant” has become part of even the Western vocabulary. In the dark, Elephant symbolizes the abusive, enraged, out of control male.

Linked with the planet Neptune, Elephant can also symbolize illusion or fantasy. In Greek mythology, the god Neptune was the god of the oceans. The Ocean, in dreams, symbolizes the Unconscious. But then imagination is a gift of the Unconscious as well, so Neptune/Elephant can bring gifts of creativity. However, the danger of the Unconscious is the possibility of becoming lost in illusion or fantasy. The dreamer can become lost in illusion in life or escape reality into fantasy, turning ones back on the challenges and learning opportunities in everyday life in exchange for the lure of imagination and fantasy. The dreamer therefore must learn to live in the Present, using his creativity to build dreams here, instead of wandering only in the realms of the fantastic within his mind. Fantasy can also bring riches of creativity. Children often fantasize about life as a way of experimenting with solutions to problems. Adults need imagination to find solutions to life’s challenges, but too much fantasizing can lead one to withdraw from life into isolation, leading to depression and loss of healthy relationships if not attended to. If we lose the ability to play and instead start to take life too seriously however, Elephant can teach the adult how to play with others again and thereby restore lightness and laughter to his life.
Posted by Jerd Guillaume-Sam at 8:38 PM